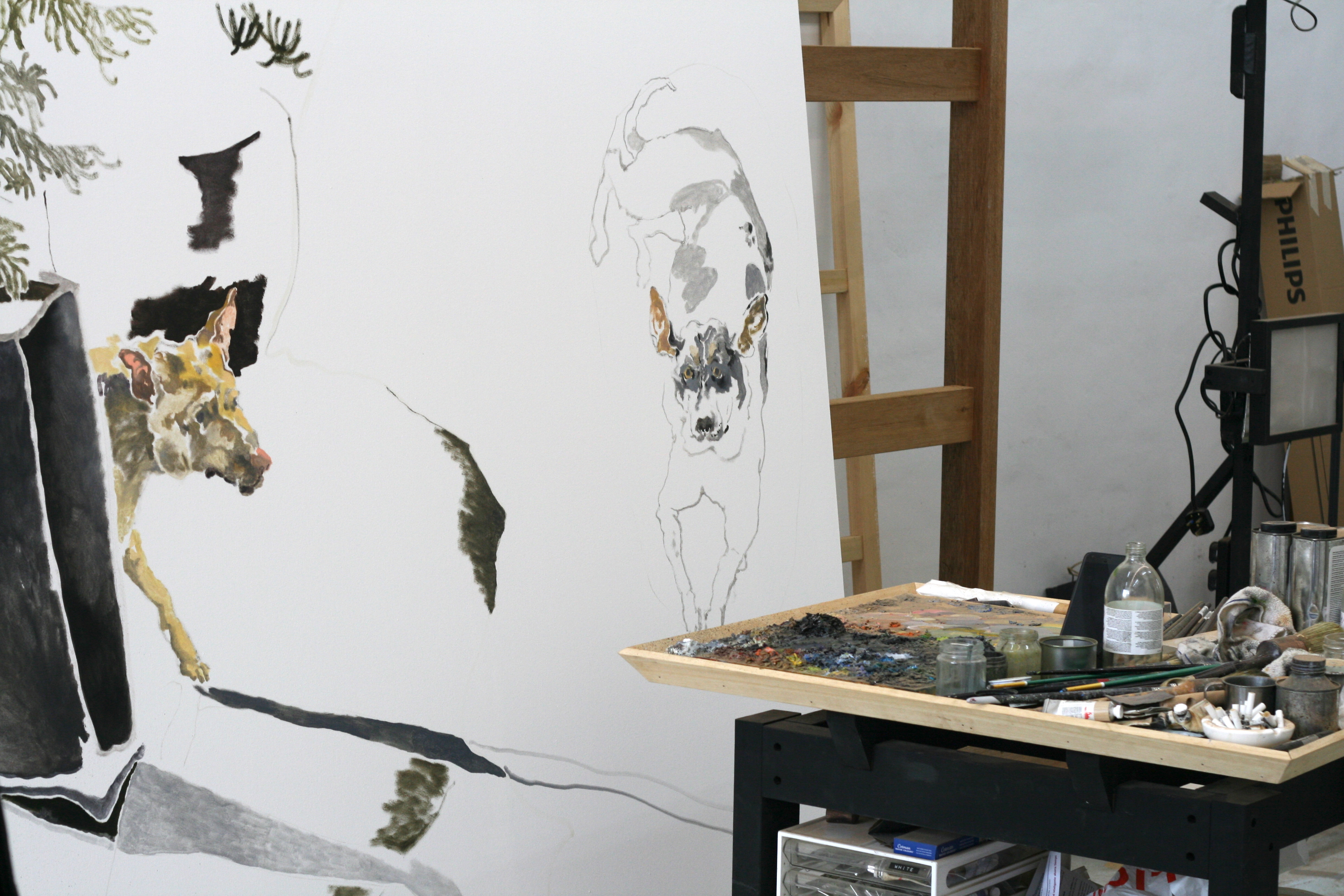 As a painter and in person, Chris Huen Sin Kan is far beyond his years. His intuitive paintings look less like those of a 27-year-old and more like those of an artist who’s had several decades to hone his visual language, arriving at a mature and idiosyncratic style of painting. Born and raised in Hong Kong, Huen has been drawing since he was a small child, and earned a BA from The Chinese University of Hong Kong (CUHK). Made with fluid and sometimes staccato brushstrokes, his paintings are characterised by their quotidian content and sketch-like quality; Huen achieves this aesthetic in part by thinning down his oils with turpentine until they appear almost like watercolours. The bare canvas shows through in many places on his paintings; the viewer is left to fill in the blanks of negative space like a word game. These gaps in perception are fundamental to Huen’s philosophy: rather than painting direct representations or his memories, he is concerned with exploring the fragmented experience of looking. With a restrained palette and vegetation sprouting all over his domestic scenes, his paintings sometimes include his wife Haze and young son Joel, but more often feature his three dogs, which he renders with a minimal number of brushstrokes.

Elliat Albrecht: Can you tell me about your experience studying at CUHK? Chris Huen: At CUHK I studied many different forms of art. One medium I was fascinated by in particular was installation, as I didn’t know much about it before I went to college. It was a very good learning experience, but personally I couldn’t find a good way to investigate the form deeply. So I turned my attention back to what inspired me to engage in art in the rst place: painting. I think most kids become interested in art through drawing and painting when they’re young; it was true for me.

In school, when I started to learn the basics of both western and Chinese paintings, I was dealing with two completely different systems of depicting things. Western painting reconstructs things we’ve seen on a surface, and Chinese painting reconnects strokes to things we’ve seen. This led me to think there is a very critical and fundamental question about painting: how do we recognise things that are depicted? What is more, I began to wonder about what painting as a subject really means. Since then, painting has been the main medium that I’ve investigated as an artist.

At the core of my investigation is how we recognise what we know from life within the images of a painting. My works are somehow about my understanding of things and how that appears to others. In this way, I always regard my paintings as writing, similar to the traditional Chinese idea that painting corresponds to writing. I care about the imagery which represents my experience of seeing. So most of my work wasn’t initiated by a material or a concept. It turns out my work contains ideas of how things could be understood, but not a system of how things could be put into order.

EA: Was there a defining moment that changed your practice? CH: Yes. When I was in college, I worked part-time teaching drawing to very young children. I asked a little boy to copy a blue elephant from an image I had provided. After he finished, I asked him to draw whatever he liked. He drew a solid black ball and when I asked him what it was, he told me it was a cat. I was really inspired at that moment. It made me think of René Magritte’s famous The Treachery of Images (1928–9), but the kid’s drawing made the complete opposite statement from Magritte’s. He drew something without any of the significant features of a cat and called it a cat. It made me question what images in paintings really represent. Perhaps the kid had once seen a curled-up, sleeping black cat and that’s why he drew it as a circle, but we couldn’t surmise that from the drawing. On the other hand, he had never seen a blue elephant in his life but could recognise it from a few important features of the image I showed him. This was an important moment in how I think about painting.

EA: You mentioned the highest form of art, including in literature, poetry or music, is the investigation of something that is undefined – or, in other words, the ineffable. What undefined entity are you exploring? Is there an aesthetic question you’re grappling with? CH: I want to share a quote from a novelist Jerzy Kosiński: “The principles of true art is [sic] not to portray, but to evoke.” I always think good art isn’t just about stating the facts, but recalls a shared experience to our conscious mind. For now, I’m focusing on depicting humdrum moments in which we cannot get ourselves narrated. Such uneventfulness is being forgotten in our daily life and neglected when we try to understand our days.

EA: When we first met, in April this year, we were discussing how you know when to finish a piece, and you mentioned that you’re the first person to ever see your paintings. What does this mean to you? CH: I think painting is directly related to our vision, especially when it comes to imagery within a picture. The progress begins when we first see something and relate it to the images we are looking at. When I’m painting, I’m the first person to witness that the moment depicted is happening. Throughout the process, I’m the only person really reacting to that scenery.

EA: Can you elaborate on your interest in painting the experience of seeing, rather than memory, and where your sense of colour comes from? CH: I want my paintings to reflect the complete experience of being in a space and seeing things. We are actually looking with our eyes and seeing things with our mind. Our mind perceiving information is preceded by our senses. Think of how our bodies can react without going through our brains, like in dangerous situations.

But mostly we respond to our understanding of the whole situation of the scenery. The things depicted in my pictures might be something I had seen before, but when I make my works I want them to be my responses to the present. So I refuse to say it is from my memory, which would refer to something that happened in the past. The sense of colour also arises from this idea. Rather than a scientific approach, I tend to take a sentimental approach to applying colour. I believe other senses apart form sight affect how we perceive colour.

EA: Earlier this year, you moved from working in your grandfather’s old home in Kowloon to your current studio in Yuen Long. Did this have any effect on your practice? CH: I’m still discovering what is the real difference between the two different work spaces. For now I would say maybe the way I perceive space has changed. I used to visit my grandfather every Saturday when I was a kid, so the way I perceived my old studio was always between memory and the current moment. But now I work in a new industrial at, and all I care about is the new neighbourhood and environment. Many factors changed, like my routine, that affect my practice.

EA: What’s your routine in the studio? CH: I usually work there on weekdays from 9.30am to 7.30pm and save the weekend for family. I like to listen to European pop or American folk songs from the 70s and 80s.