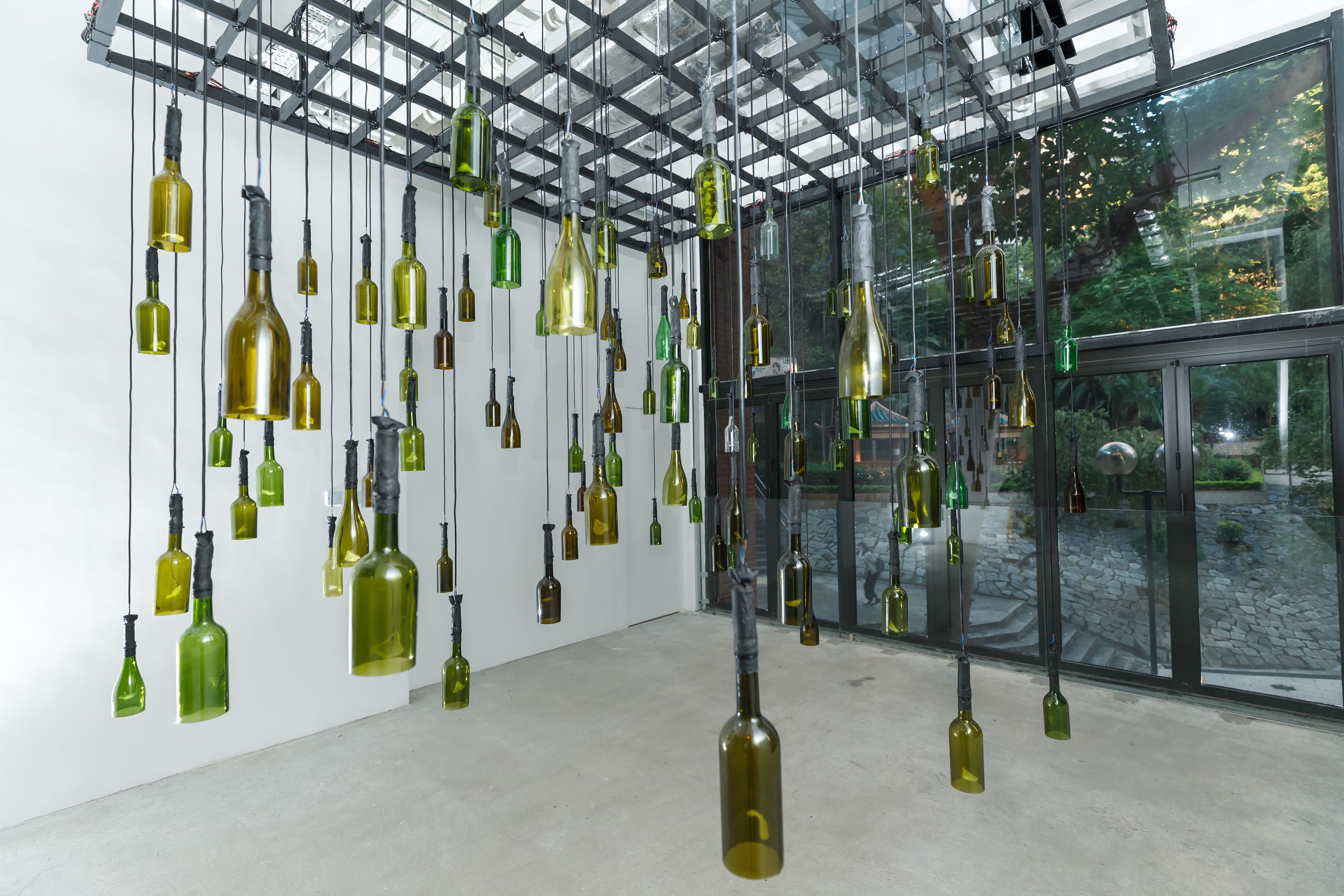 For Wander in Style, a collaboration with Leo Gallery, Little Tai Hang is displaying works by new-media artists Cheuk Wing Nam and Han Jinpeng in its gallery and outdoor public areas. The whimsical pop-up show explores social themes and challenges the conventions that have traditionally surrounded classical art.

Cheuk’s sound sculpture Avaritia – Silent Greed consists of about 90 green glass bottles of various sizes, suspended from a large ceiling grid similar to those used for hanging ower pots. Dangling inside each of the bottomless containers is a shard of plastic that is connected to a power source and programmed to swivel around randomly. The result is a cacophony of sounds of varying frequencies as the plastic shards strike glass.

Viewers are encouraged to visit at dusk, specifically at 7pm when it is most atmospheric: from this hour, it becomes clear in the darkened space that the bottles are also individually lit with warm fluorescent lights. The beating movements of the plastic accentuate the contrast between light and shadow, creating an effect evocative of fireflies uttering around in a jar – ying yet going nowhere. The bottles were discarded at the Hong Kong Wine and Dine Festival while the plastic shards are from Sham Shui Po market; Cheuk is drawing attention to the relationship between production and consumerism.

Complementing this are ve video installations based on masterpieces by Vermeer, Caravaggio, Velázquez and Kramskoi, all re-enacted by Han Jinpeng. Han unexpectedly and serendipitously displays in outdoor public areas versions of classical portraits usually seen in museums. As the main character in the videos, Han also treats the viewer to a voyeuristic view of himself in various states of being. Whether yawning, falling asleep or having his Dutch maid’s linen cap blown away (The Milkmaid in the Strong Wind, à la Vermeer), he imbues his subjects with humour and relevance, breathing new life into static pieces and playfully challenging his audience to look at classical art from new perspectives.

Wander in Style is a journey into the unexpected, both in its location in a neighbourhood that is usually considered o the beaten path, and in the element of surprise inherent in the installations. It captivated and delighted its audience with its quirkiness, but wasn’t frivolous or superficial. Both artists delved into societal issues and raised valid points about ways of viewing art.