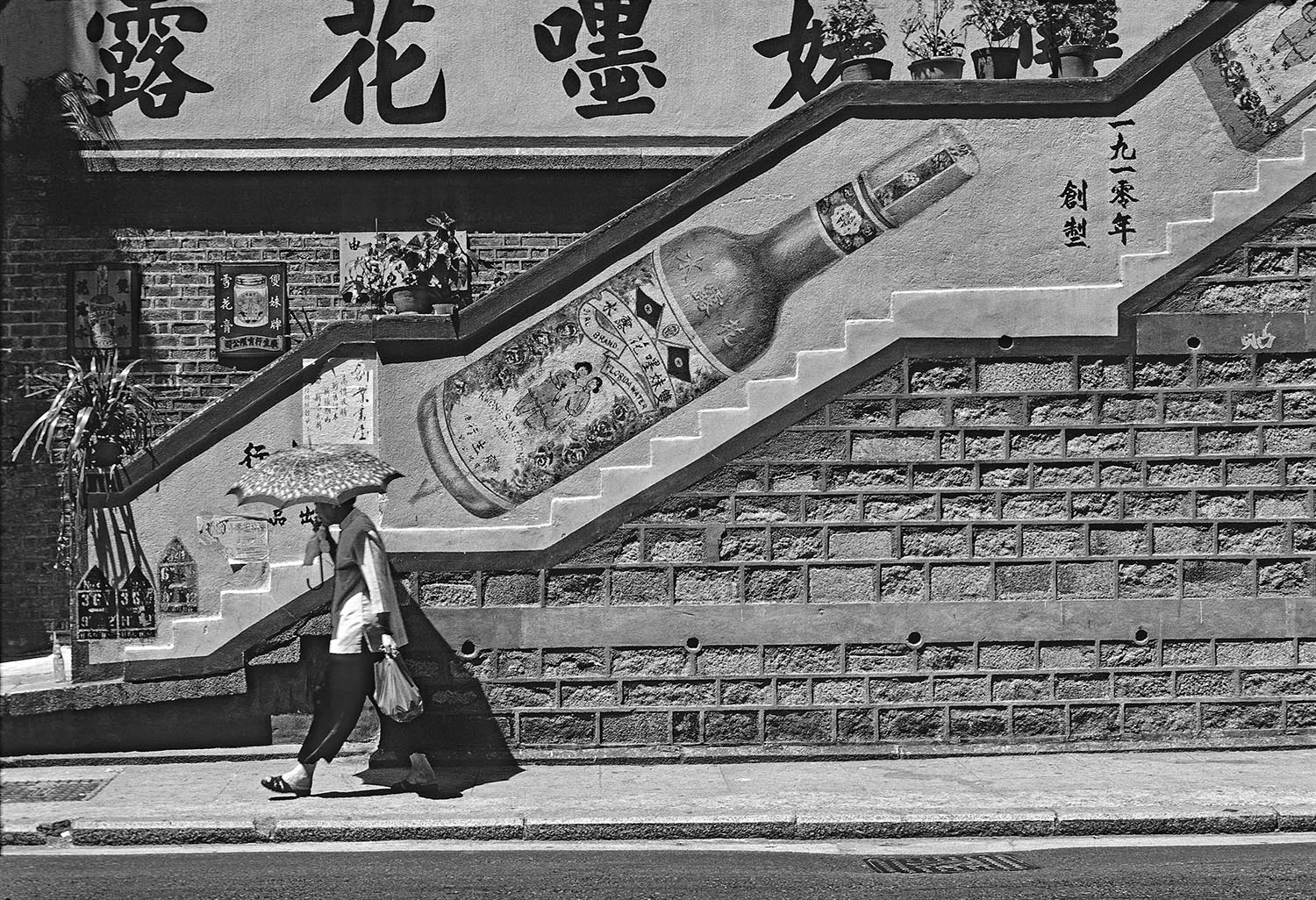 Upon entering the gallery, it is as though the viewer has stepped into a time capsule. The black-and-white photos of various sizes, some framed and some unframed, are the work of award-winning photojournalist Robin Moyer from a career spanning over five decades in Asia. They showcase the transformations of mainland China and Hong Kong from 1976 to the present day.

Steps at #24 Caine Road Hong Kong features a strong diagonal composition, with an advertisement printed at the side of the stone steps. The ad for Two Girls, a cosmetics brand with which generations of Hong Kong citizens have been familiar, evokes a sense of nostalgia.

Bicycles is a snapshot of the daily life of ordinary citizens in mainland China in the 1980s, featuring what for a long time was China’s most popular mode of transport. The crowd in
the foreground is juxtaposed against uneven shadows in the background cast by trees, adding to the depth of the image. This photograph not only documents the passage of time but also reflects micro-narratives that exist simultaneously alongside the official accounts of history.

Moyer believes that, compared to colour photography, black-and-white brings content to the fore. His job as a photographer for Time and Life magazines allowed him to capture images of people and their actions at newsworthy locations, including in conflicts in war zones, often with a personal touch.

Besides black-and-white prints, the exhibition also includes hand-printed platinum photos, all individually printed and signed by Moyer on Hahnemühle fine art photo paper. The subject matter ranges from the sociopolitical and economic conditions of society to contemporary rural and urban scenes, featuring factories, prisons, ancestral homes, tea houses, schools and Chinese restaurants. The protagonists in the photos also come from diverse backgrounds, including soldiers, school children, factory workers, farmers and fishermen. The photos, juxtaposed against each other, offer a comprehensive overview of the development of Asia, particularly Hong Kong and China, throughout recent decades of rapid modernisation.

Paradoxically, Moyer’s photographs exude a sense of timelessness, even though they were taken over several decades. Carefully selected from his extensive archive of negatives, they allow the viewer to witness snapshots frozen in time with the highest quality of technical execution.