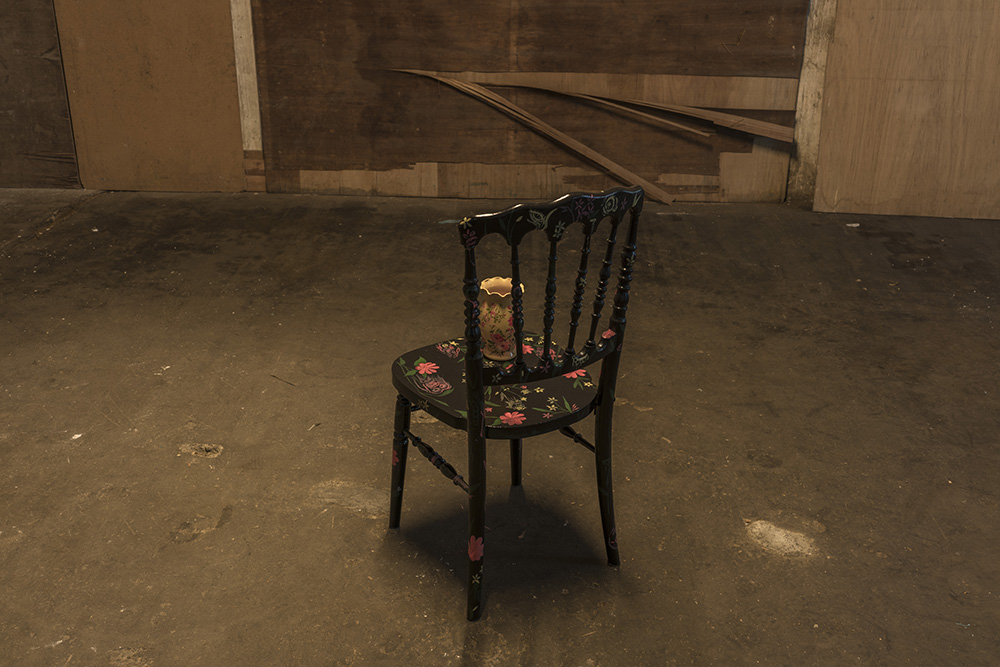 Chatting with Oscar Chan Yik Long at a coffee shop on D’Aguilar Street, Central, it’s hard to imagine that the sunny artist, decked out in one of his trademark vibrantly patterned shirts, lives his life haunted by demons.

Born in Hong Kong in 1988, Chan studied at Hong Kong Baptist University’s Academy of Visual Arts but it was an “abstract” fear of demons, planted in the artist’s mind when he was still a young boy, that weighs most heavily on his paintings.

As much as he fears and is repelled by fear, he is also drawn to it. In his art, screaming skeletons, amorphous beasts and ghoulish, tear- or blood-shedding creatures fill walls and life-sized canvases. “I need to give fear a form,” he says.

Chaotic and unabashedly confessional, they’re the portraits of a tangled mind that vacillates between fearing and repelling these creatures, and being drawn towards them. We sat down with Chan on the eve of C&G Artpartment’s The Survey Exhibition, where he is exhibiting a work.

Christie Lee: There is so much fear in your art. When did you start feeling fear? Oscar Chan Yik Long: When I was about seven, I was really scared of ghosts and vampires. I lived in a public housing estate with my parents and two older sisters. You know Hong Kong public housing estates have these long corridors, and whenever someone walks past, there’d be an echo. I shared a bed with my parents, but my dad was away for business all the time, and my mom worked until the wee hours, so I’d circle the bed whenever the feeling of fear overcame me.

Another memory was when I was 10. It was the first day of summer. My brain hurt like mad and I was rushed into surgery. It turns out that a blood vessel had burst in my brain, forming an egg-sized clot. I had very little idea what was happening. I only remember feeling very dizzy and nauseous. On the seventh day, I managed to climb out of bed to look at the mirror. There was a row of staples on my forehead. I looked like Frankenstein’s monster.If I’d had the surgery now, I would have felt very differently.

CL: How would it be different? OCYL: When I was younger, I only knew that I’d lose everything in the blink of an eye, like I’m standing on the edge of a cliff. Now I consider death as a part of a process, not an end point. I used to get anxious very easily, and I still do. I still panic during security screening at the airport. I went to the toilet 10 times on the night prior to my flight to Guangzhou for my solo show in 2015.

CL: Are you portraying your own personal fears in your paintings, or fear in general? Can the two be separated? OCYL: I paint what I feel, but it’s never as direct as “I’m scared of this particular thing so I’m going to paint this thing”. Fear itself is very abstract thing, and I find myself constantly trying to find a tangible object to feed it. For me, art is a kind of therapy. I need to live with this fear. At one point, I thought of befriending it, but I realised that it only added to my anxiety as I was always thinking about it. The process of learning to live with it is already a kind of transformation for me.

CL: Why do you need to feed it? OCYL: I have always lived with fear. I wouldn’t know how to not to.

CL: So fear is a kind of motivation? OCYL: You can say that, but I’m also beginning to think it can be replaced by happiness. Maybe my move to Paris will change that.

CL: Is that why you’re moving to Paris – to be happy?OCYL: Not exactly. I have never lived abroad so I’d like to try, to gain a new perspective on things. But I’d also like to do more research on the topic of demons.

CL: Are you religious? OCYL: No. I’m not as interested in religion as in belief as structure: the way that religions manipulate fear. Although religion is connected with spirituality, and spirituality supposedly puts us at a higher level, religious stories and rules are written by man. I believe that there is something out there. I believe in reincarnation and karma. I don’t just follow one religion, as there something I can take from every religion. My beliefs are not stagnant, either; they are always changing, transforming.

CL: Since your art is so personal, do you ever fear being judged?OCYL: I always believe in the saying, “What you resist, you resist in yourself”. I’m always told to be stronger but if I weren’t strong, I wouldn’t be here. I mean, why would I even bother? My dad would tell me to stop crying, but crying is a form of release. It’s not a show of weakness.

CL: The Most Misplaced Worry, your work at the C&G Artpartment, comprises a stack of gutted cigarettes. What is the inspiration behind it? OCYL: It’s about my boyfriend. I also fear when he smokes, as it is a sign that he could get sick and die, and the cigarettes symbolise my fear of
losing him. Even if he weren’t a smoker, I could still lose him in a thousand ways. So it’s not about what he does, but how I handle my worry.

CL: Many Hong Kong artists are responding to what’s happening in Hong Kong politics and society through their art. What is the relationship between art and politics?OCYL: It’s inevitable that I’d feel affected by my surroundings. When you open the newspaper, all you see is the bad, in Hong Kong or elsewhere. The anxiety is always there. But if I were to directly respond, it wouldn’t be through art. I mean, I’m gay but I don’t want to label my art as gay art, as it’d pigeonhole my work and me.

CL: What will you miss most about Hong Kong? OCYL: Definitely the food. And the convenience. It’s just easier to get things done here, though that’s not always good. I had to print a batch of postcards around Christmas one year, and the guy from the print shop rang me past midnight on December 24 to tell me that there was something wrong with my file. I didn’t mind the call, but seriously, why was he even working on Christmas Eve? Many Hongkongers take pride in this convenience, including my mother, but at what cost? My boyfriend has no television, only a radio, and he still buys magazines. It’s a completely different way of knowledge consumption. There is less anxiety. If a Hongkonger is on the beach, he or she might think, “Should I be reading a book or something?” In Hong Kong, there are many desires, and many different ways to fulfil those desires. If they aren’t fulfilled immediately, one feels anxious or scared. It’s a vicious circle.

CL: Could you imagine making art without that well of fear to draw from?OCYL: Perhaps I’d stop making art altogether. It’s a process, I think. Sometimes I feel I could paint when I’m feeling calmer. For my solo show at Things that can happen [Soliquid, 2017], I trapped myself in the art space for 18 days. There was no television, no phone. Before the exhibition, I bought a lot of pills and water, like it was the end of the world. I felt panicky for the first few days, but after 10 days I started to get used to it. There was nobody to ask if you are productive, no questions like “What did you do today? Do you feel you were efficient today?” I covered the four walls with straight lines. The idea is that I’m in the eye of this hurricane [of black lines], where it is most peaceful.