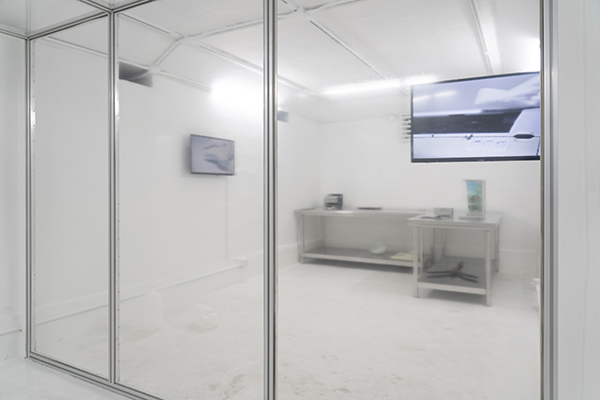 Cold, clinical sanitation overpowers the senses as you step down into underground art space The Bunker. Plastic film stretched over aluminium frames blocks off portions of each room and creates narrow alleyways and low ceilings. This mimics the dust-free rooms found in some factories and medical facilities. Emerging artist Ko Sin Tung leaves it to the audience to decide whether they are being protected from or deprived of something. The slightly opaque quality of the plastic sheets creates uncertainty about the nature of the objects behind them. Once the eyes adjust to the blurriness of the plastic, the pieces begin to take shape. During her stay in Beijing, Ko gathered an array of paraphernalia and second-hand household items for the show.

She introduces the theme of cleaning by placing a lone metal scouring pad on the ground of the first clean room and lighting it from above with a white neon tube. In the next two rooms, Ko plays on the symbolism of hard, cold, stainless steel hospital instruments, juxtaposing them with more fragile objects commonly found in domestic settings. Two stainless steel IV poles, for example, hang ominously from the ceiling of the second chamber. A small metal medical-instrument stand holds the remains of some curious objects. A portion of a bedframe leans against the back wall. In fact, all the stainless steel pieces, which are also all medical items, are intact, whereas the household goods exist only as fragments, important parts of them having been removed in an act of cleansing or purging.

Dominated by two large, stainless steel work tables, the third room also features two video screens. One projects a loop of an act of cleaning, with a continuous, non-stop motion. The second shows the artist smoothing over the edges of objects she has previously cut. Segments of a fish tank, a printer, a clothing tree and large water bottles are among the cut-up household articles on display on the tables and ground.

Across the hall, a three-pronged water spout brought from Hong Kong fits in a very narrow enclosed space and acts like a fountain that cascades out water, chiming with the central theme of cleansing.A video in the last clean room shows all the cut objects being carefully painted blue around the outline of the cuts, with the colour symbolising cleanliness. Even though these pieces have been “cleaned” through the application of blue paint, they remain incomplete and no longer serve their original purposes.

The last room, without PVC sheets, is the depository for all the dust gathered from the dismantled domestic goods found in the previous rooms. Five machines fixed to the walls take turns spitting out small portions of finely ground dust every few minutes. This acts as a reminder that all cleaning leaves some residue.

The artist’s impression of life in the capital, gathered from reading news articles, led her to the idea that even sanitation, when taken to excess, can exert a negative effect. Even though the household items have been neatly arranged and organised, the process that got them there is a violent one. Ko references the recent abrupt removal of people from their homes and businesses that left the city looking cleaner but has negatively affected the lives of thousands, usually those most economically vulnerable.