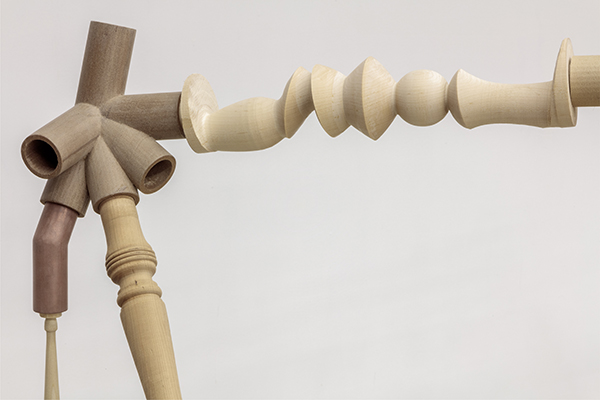 Over the past two decades, the Los Angeles–based Hong Kong artist Shirley Tse has used sculpture to consider how plastic operates as a signifier of globalisation, in terms of the material’s circulation, standardisation, and industrialisation. More recently, she has looked at plastic as an adjective, exploring its resonance, movement, and multiplicity in the contemporary period.

The exhibition in Venice presents a new body of site-responsive work that furthers Tse’s investigation into plasticity as a means to understand the world. Two sculptural installations—titled Negotiated Differences and Playcourt—embrace multidimensional thinking and mediate contrasting materials and processes to shed light on connections among subjectivities in pluralistic societies. The works explore horizontality and verticality, highlighting the unique spatial qualities of the exhibition site, which includes an interior and a courtyard. Negotiated Differences is a sprawling, rhizomatic installation of 3D-printed joints and hand-turned wooden forms that stretches across all the rooms of the space, which was historically used to store wood. Balusters, handrails, bowling pins, and abstract objects are connected by wooden, metal, and plastic elements, integrating craft, mechanical, and digital technologies.

The fluidity of form and function finds another expression in the courtyard with Playcourt. The installation’s sculptural amalgams of equipment and anthropomorphic forms on tripods draw the gaze skyward, transforming the enclosure into an improvised badminton court in which people and space must negotiate. Negotiation is at the heart of Stakeholders; foregrounding affect, empathy, and ethics, the exhibition proposes a space to reflect on coexistence amidst the differences that both reactivate our relationships and renew our individual stakes in society.

Shirley Tse works in the media of sculpture, installation, photography, and text. She at once deconstructs the world of synthetic objects that carry paradoxical meanings and constructs models in which differences might come together. To visualise heterogeneity, Tse conflates different scales, fuses the organic with the industrial, moves between the literal and the metaphorical, merges narratives, and collapses the subject and object relationship.

Tse received a Master of Fine Arts degree from ArtCenter College of Design, Pasadena, and a Bachelor of Arts degree from the Chinese University of Hong Kong Department of Fine Arts. Her work has been exhibited at venues including the Pasadena Museum of California Art (2004/2017); Osage, Hong Kong (2010/2011); K11, Hong Kong (2009); Kettle’s Yard, University of Cambridge (2009); the Museum of Modern Fine Art, Minsk (2006); the Herbert F. Johnson Museum of Art, Cornell University (2005); Para Site, Hong Kong (2000/2005); the Kaohsiung Museum of Fine Arts (2003); the Art Gallery of Ontario (2002); the Bienal Ceará América, Fortaleza (2002); the Biennale of Sydney (2002); Capp Street Project, San Francisco (2002); the Institute of Contemporary Art, Boston (2002); MoMA PS1 (2002); the New Museum (2002); Palazzo dell’Arengo, Rimini (2002); the San Francisco Museum of Modern Art (2001); TENT, Centrum Beeldende Kunst Rotterdam (2001); and Govett-Brewster Art Gallery, New Plymouth, New Zealand (2000). Her work is featured in many articles, catalogues, and other publications including Akademie X: Lessons in Art + Life (2015) and Sculpture Today (2007). Tse received the John Simon Guggenheim Memorial Foundation Fellowship in 2009 and has been on the faculty at California Institute of the Arts since 2001, where she is the Robert Fitzpatrick Chair in Art.

Christina Li is a curator working between Hong Kong and Amsterdam. She graduated from the University of Hong Kong with a degree in Fine Arts (Art History) and Comparative Literature, and completed De Appel Curatorial Programme in 2009. She was the Curator-at-Large at Spring Workshop, Hong Kong, where she served as the Director between 2015 and 2017. At Spring, she curated, among other projects, A Collective Present (2017), Wu Tsang: Duilian (2016), Wong Wai Yin: Without Trying (2016), Days push off into nights (2015), and Des hôtes: a foreigner, a human, an unexpected visitor (2015). Her most recent exhibition, Dismantling the Scaffold (2018),was the inaugural exhibition at Tai Kwun Contemporary, Hong Kong.Li previously worked as a curator at Para Site in Hong Kong from 2005 to 2008, and was the Assistant Curator of Making (Perfect) World: Harbour, Hong Kong, Alienated Cities and Dreams, Hong Kong’s participation in the 53rd Venice Biennale, in 2009. As a writer, she has contributed to publications including Artforum, ArtReview Asia, LEAP,Parkett, Spike, and Yishu Journal of Contemporary Art.

Doryun Chong is Deputy Director, Curatorial, and Chief Curator of M+, a new museum of visual culture in Hong Kong’s West Kowloon Cultural District. Appointed as the inaugural Chief Curator in 2013, Chong oversees all curatorial activities and programmes, including acquisitions, exhibitions, learning and public programmes, and digital initiatives encompassing the museum’s three main disciplinary areas of design and architecture, moving image, and visual art. Some of the exhibitions he has curated or co-curated at M+ include Mobile M+: Live Art (2015); Tsang Kin-Wah: The Infinite Nothing, Hong Kong in Venice(2015); Samson Young: Songs for Disaster Relief World Tour (2018); and Noguchi for Danh Vo: Counterpoint (2018).