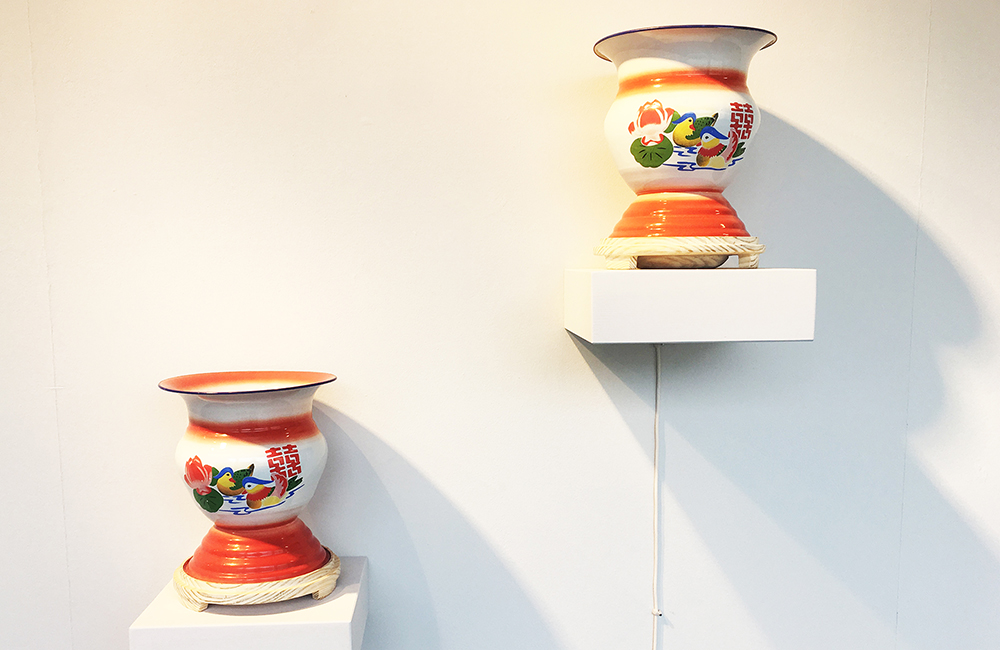 As I walked down the corridor of Murray Edwards College, Cambridge at the new exhibition Women in Art: Hong Kong, the words of writer Eileen Chang came to mind: “Between memory and reality there are awkward discrepancies, producing a solemn but subtle agitation.” The works on show, by artists as varied as Fang Zhaoling, Au Hoi Lam and Ko Sin Tung, are mostly unrelated to one another: some are political, some pay homage to traditional Chinese craft and others fall somewhere in between. But what unites them is a certain restlessness in their melding of memory and
reality, and of past and future, as they interrogate the notion of a Hong Kong identity.

Co-curated by the New Hall Art Collection and Eliza Gluckman, Women in Art: Hong Kong is dedicated exclusively to women artists working in Hong Kong. The works represented range from guohua painting to conceptual
installation, covering 50 years of artistic development. The New Hall Art Collection is a collection of modern and contemporary art by women artists, founded in 1986 after its acquisition of Mary Kelly’s Extase (1986).
Opening on International Women’s Day 2019, this is Women in Art: Hong Kong’s second iteration, the first of which was at Sotheby’s Hong Kong in 2018, featuring 13 Hong Kong women artists such as Ellen Pau and Irene Chou. Its mission is to redress the gender imbalance seen in the high percentage of practising male artists versus the considerably higher proportion of women in arts education.

Most recognisable of the artists on show is the painter and calligrapher Fang Zhaoling. Known for her distinctive landscape style composed of calligraphic lines and rich colours, Fang has recently had retrospectives in both Hong Kong and Oxford. Here at Women in Art: Hong Kong, Fang’s works Deep Autumn (1974-77) and Terraced Fields (1981) transport the viewer from Murray Edwards’ brutalist architecture to a dreamscape of the natural world. In Deep Autumn, Fang’s precisely rendered miniature figures are set against an expansive mountain range, while in Terraced Fields the rolling landscape cascades with the force and grace of a calligrapher’s brush. Fang’s own technique of scrunching paper into balls and dabbing them in ink adds a textured weightlessness to the works. The subtle ripples of colour keep the eye hopping around these gestural panoramas. Born in Jiangsu and educated in Hong Kong and Oxford, Fang embodies the outward-looking hybridity that has characterised Hong Kong’s identity for much of the 20th century. Informed by her training under Zhao Shao’ang and Zhang Daqian and her contact with the developments in Western abstraction, these works are a refreshing reminder of her established amalgam of styles and influences. Even without any knowledge of Chinese painting, visitors can freely lose themselves in Fang’s elegant works of floating rocks, trees and fields.

Such dreamscapes then give way to more political gestures by artists such as Au Hoi Lam, Jaffa Lam and Choi Yan Chi. In the work, Au Hoi Lam’s Hong Kong, Hong Kong (2016), one finds a bright yellow canvas on which a clearly
delineated map of Hong Kong is put in contrast with a hazily rendered identical map beneath it. The minimalist paradigm of carefully defined lines and subtle changes in colour conveys the fragility and potential erasure of a Hong Kong identity. In this light, the title sounds less like a jazz ode to the city than a plaintive cry for its future disappearance. An uncomfortable truth, intermingling present and future, emerges as a more haunting concern the longer one looks at the canvas. Between the two maps are 50 parallel diagonal strokes, which appear to symbolise the timespan of the “one country, two systems” policy. The use of pencil and acrylic on linen functions as an allusion to the history of fabric painting in China, bringing traditional craft in line with contemporary politics. While the gentle lines recall the practice of Canadian artist Agnes Martin, undergirding Au’s work is a more profound reflection on the legacy of handover and its resulting anxiety.

In Save a Star in your Spittoon (2015), Jaffa Lam transforms the functionality of the spittoon, an object used as a status symbol for emperors and Communist leaders alike. The work was inspired by a photograph of a meeting between Deng Xiaoping and Margaret Thatcher in which handover of Hong Kong was discussed with a spittoon sitting at their feet. Lam inverts the relic of a political past into a playful plea for the Hong Kong people to keep something of their own identity. For her conceptual piece made specifically for this exhibition, Drowned Books (2019), Choi Yan Chi asked 12 women in Cambridge and 12 in Hong Kong to choose a significant book. As an eerie visualisation of political repression, the 24 books selected are submerged in vegetable oil in the work. Physical and epistemic drowning are thus collapsed into one another as each book stands for both a
person and a personal pursuit of knowledge. Indeed, these stewed, decaying books function as an explicit and timely reference to the suppression of the June Fourth movement in 1989. By mixing craft with politics, the exhibition demonstrates how inextricably linked politics and contemporary art have become in Hong Kong.

There are allusions to urban alienation in other works, such as Orange Land Green Void with Leon Sign (2010). Here Mediha Ting seeks to disorient the viewer by merging bright pinks, greens and reds with abstracted shapes and text. The unrelated string of words in the title deliberately frustrates any clear-cut meaning, while the word ‘leon’ points to a humorous reference to the Cantonese conflation of the English letters ‘n’ and ‘l’. As neon signs become a thing of the past, Ting’s collage wrestles with the memory of a previous Hong Kong heyday and the reality of its present.

No stranger to the disappointment or alienation of the present, Ko Sin Tung exhibits Express (2016), a pixelated inkjet print of the Express Rail Link connecting Hong Kong with Shenzhen. As if to evoke the yellow tape surrounding a construction site, the image is partially covered by a strip of yellow washi tape. Ko calls our attention to the constant building work inherent in globalised financial centres and the widespread feelings of detachment it provokes. The pixelation challenges our habit of seeing images in sharp focus all the time, hypnotising the viewer and suspending anxiety and tension. Much like the florescent lights of Mediha Ting’s work, Express is absorbing and elusive. The closer we look, the more attuned we become to a sense of confusion or agitation.

Women in Art: Hong Kong might strike some as a strange medley of works by a set of unrelated women artists. Certainly, the exhibition would have benefited from a clearer trajectory linking Fang Zhaoling to the more contemporary artists. But the haziness present in both the works and curation does much to reconstruct the political uncertainty intrinsic to many of the pieces.