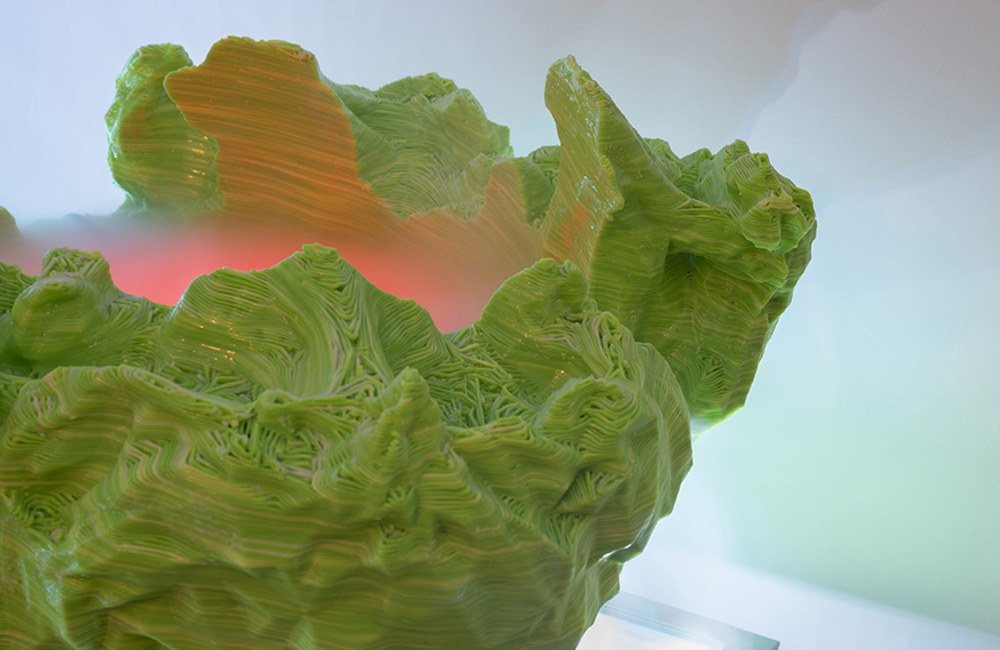 When the Sun Wah Centre was constructed in the 1980s, it was envisioned as a neighbourhood mall for Vancouver’s Chinatown, the kind one might find all over Hong Kong: a fountain on the main floor, central escalators wending their way up through glitzy tiers of fashion and food. This never materialised. The building’s few vendors nestle in a near constant state of pink-walled disrepair.

The setting is apt for Samson Young’s exhibition It’s Heaven Over There, curated by Tyler Russell at Centre A, which has recently moved into the Sun
Wah Centre, alongside other arts organisations that are transforming this under-realised mall into a cultural hub.

The first display in Young’s exhibition resembles a shopfront: blaring pop music, a glass case full of trinkets. It is an appropriate beginning to an
exhibition focused on the mall itself. It’s Heaven Over There is the second in a trilogy of site-responsive exhibitions by Young that critique utopian
projects and their fraught, often unexpected outcomes.

Dancing through all of this is the figure of Alexander Won Cumyow, who according to documentation was the first ethnic Chinese person born in Canada. In the early 20th century, Won campaigned to establish aconstitutional monarchy in China, even though he never intended to live there. His vision for a neo-monarchic China was idealistic: a dream whose potential might have been more important than any actual outcome. Perhaps this is why Young has positioned Won in effigy, dancing through a hallucinogenic, half-realised dreamscape.

Won’s ideal China was a retrotopia, fantasising about the glories of the past. The shopping mall is having its own retrotopic moment, after being endangered by the internet. Civilisation yearns for progress, only to lament later what was lost along the way. The endless cycle of utopia and retrotopia finds physical trajectory in Young’s video: objects whirl on the spot; dance moves repeat in loops.

What utopia and retrotopia share is a disregard for limits: of physical resources and of imagination. In Big Big Company, space tessellates endlessly, to the point at which objects fracture and distort; fountains run ad infinitum, only to overflow cataclysmically. Young’s Mist Machine series of sculptures extend this motif of the fountain as something that is perceived to protect from bad luck but that in reality wastes precious resources for ostentatious display.

It’s Heaven Over There contemplates the costs of utopia – or, more precisely, the costs of our untenable utopian projects failing, and of starting over and over again. Utopia isn’t grand development or faster commerce; that’s been tried. Perhaps it’s rooted in quieter things that blossom amid their ruin – like art galleries and studio spaces taking over an abandoned mall.