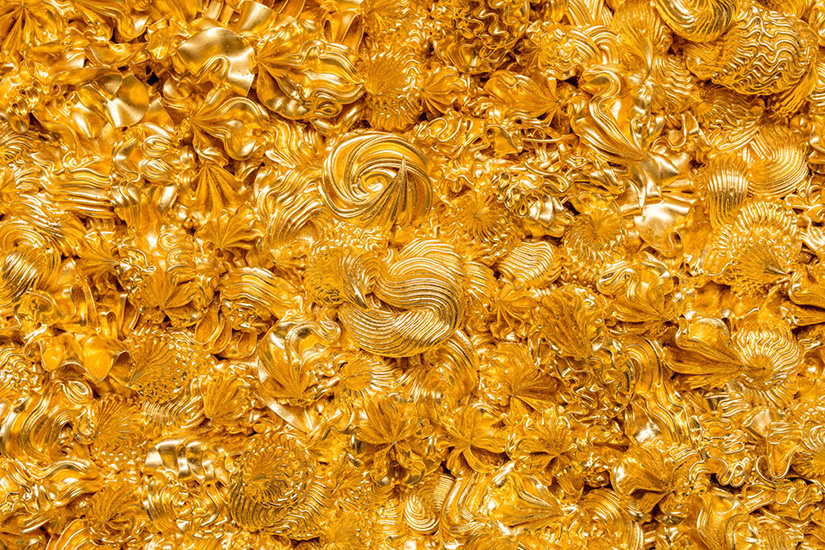 Walk into Perrotin, and a towering sculpture commands the middle of the room, surrounded by two large-scale series from Xu Zhen’s solo exhibition The Glorious. The juxtaposition of media and styles typifies Xu’s exploration of cultural exchange, authenticity, history, globalisation and capitalism. The prolific artist founded MadeIn Company in 2009 and creates work both individually and through the collective practice of the group.

In Eternity – Northern Qi Painted Bodhisattva, River God Ilissos from West Pediment of Parthenon (2018), from Xu’s Eternity series, a replica of a Northern Qi (AD 550-577) figure is posed upside down on top of a replica of a Classical Greek sculpture, with the head and arms removed from the former to match the latter. The two headless, handless bodies are seemingly defenceless, conjoined at the necks in an unwilling but inevitable clash of cultures. The sculptures depict Gods and the Buddha as figures elevated beyond mankind; comically connected, they satirically confront the fluidity and struggles of humanity, globalisation and relationships between ideologies from the east and west.

Xu’s oil-on-canvas series Evolution, developed from Eternity, explores elements found in different cultures across time. Traditional African face masks are layered on top of murals from the Mogao Caves in Dunhuang, China, with the masks replacing the underlying painted figures’ heads. The glaring differences between them challenge contemporary cultural mashups in an age when accessibility alters quality and transforms understanding. The disruptive content creates a social critique of the way we collect, retain and use culture in our modern world.

In bold visual contrast to the rest of the exhibition, Xu’s opulent monochromatic series Under Heaven – Gold is a reiteration of his colourful signature series Under Heaven. The piped gold evokes the tops of cakes, ice cream or Iced Gem biscuits, turned into swirly signifiers of consumption and excess. However, the gold, unlike the previous candy-coloured pieces, seems to replace innocent, youthful decadence with a solid display of wealth.

The gold exudes a triumphant spirit, mocking the art market and its shallowness. Black walls serve as a backdrop for the exhibition, and make the gilded 3D wall pieces stand out, the glaring, textured surface questioning the limitations of commodifying culture and gluttonous consumerism. The exhibition title, The Glorious, describes the glow emitted by the works, which bathes viewers in a subtle reflected sheen, but it questions whether those standing in the gold radiance are worthy of being showered in the luxurious light. If everyone is worthy of basking in the luxury, what does that say about value, originality and production?

Xu’s exhibition critiques culture and society through humorous, engaging works. It provides insight into the coexistence and collisions of cultures, shifts in our globalised society and the question of what we value.