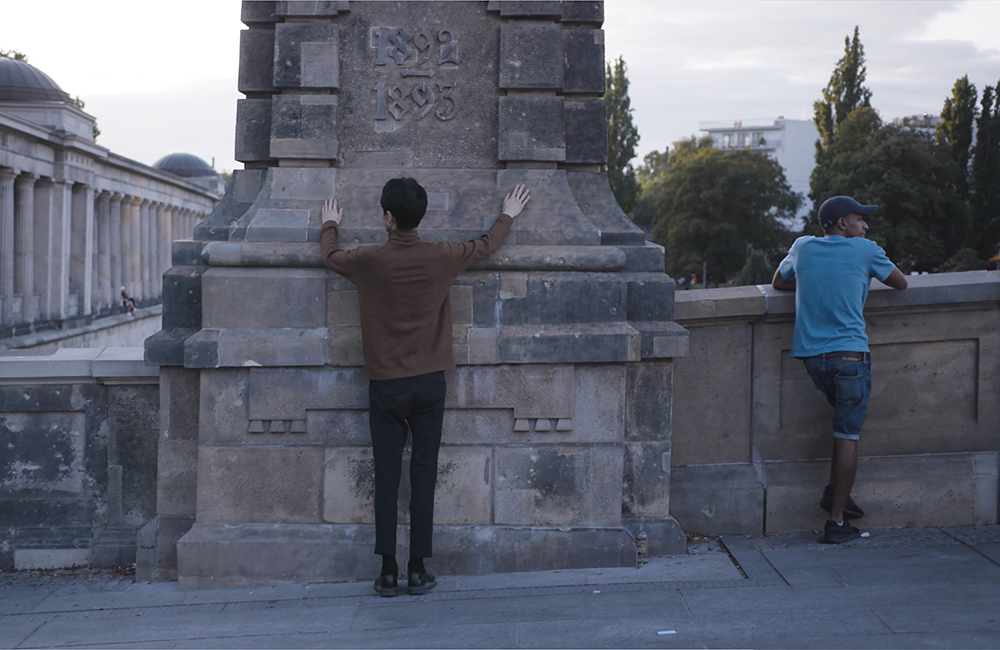 What is the future in the past? And what is the past in the future?, the first solo exhibition in Berlin by Hong Kong multimedia artist Isaac Chong Wai (b.1990), at Zilberman Gallery, features the debut of his new work pietas (2019). In the work, performers Saori Hala and Nobutaka Shomura re-enact four postures based on iconic biblical images, including references from Michelangelo’s Pietà (c.1498-1500) and German artist Käthe Kollwitz’s Mother with her Dead Son (1937), which commemorates the victims of war and tyranny.

The performance prompted contemplation of human vulnerability, violence and humanity. Emotions and empathy were intensified by the long, static postures and dramatic facial expressions of the two performers that froze the room in absolute stillness, creating a collective moment to mourn, meditate and pray. The strategy of the piece recalls Yvon Chabrowski’s video work Afterimage/Protest (2013). But Chong devised a confrontational dichotomy in two of the re-enactments by shifting the gender roles, creating scenes where the dead mourn the living. The piece also referred extensively to recent images of injured civilians and protestors from Hong Kong, echoing Chong’s previous video work Rehearsal of the Futures: Police Training Exercises (2018), which now seems prophetic for the
city while at the same time demonstrating how history keeps repeating itself.

As a sequel to The Silent Wall (2014), in which the artist tried to cover the bullet holes on a wall in Sarajevo, Bosnia, in May and June this year he conceived The Silent Wall – Berlin (2019), using his hands to cover the scarred walls of Berlin, as if he were trying to heal these forgotten wounds from wars. These voids that serve as memories were cast into fragile glass sculptures in his installation Missing Space (2019): each piece, mounted with a GPS number giving its location, is covered by a fragile sheet of glass not level with the base. The sculptures provide a powerful sense of instability, as if they could collapse at any second, highlighting the brutality of physical wounds and at the same time the mending and commemoration of them. Each piece encapsulates and preserves human memory and history that might well disappear with the city’s rapid development. These works are not a direct response by the artist to the current political situation in Hong Kong, though they embody subconsciously the many turbulent political situations experienced throughout history.

The notions of time, memory and space are central to Chong’s performative practice, in which he appears himself. This exhibition explicitly engages with its German historical context: the artist dates a guy who later writes him a letter about their kiss during a concentration camp visit in I Dated a Guy in Buchenwald (2013); he uses his warm breath to try to blur a window in Neue Wache (2015); he holds a white flag upside down in front of a Nazi bunker in Vienna in Flakturm and the White Flag (2016). His presence prompts the audience to reflect beyond their own physical existence, and instead to contemplate their emotional and ethical existence within human memory and history, often mediated by different forms of violence.