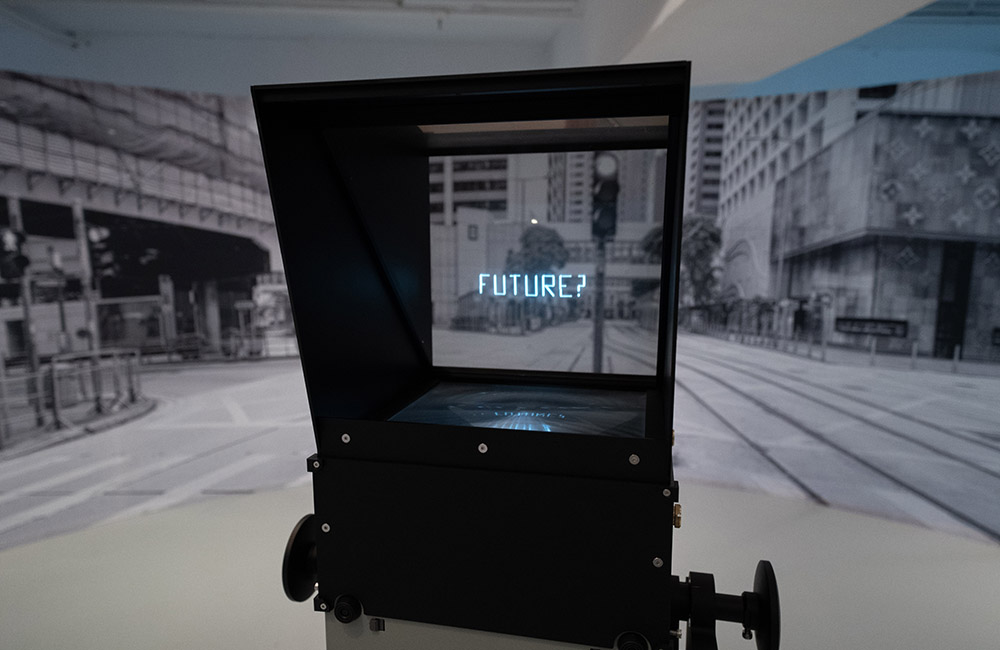 Sometimes, art can leave its viewers scratching their heads. Much of it is staged to be seen from a distance in sanitised rooms, short pieces of text pasted beside it lazily flicking at pre-verbal notions. You might not engage with these objects beyond mental acrobatics or passive sensations. What you see or feel is often exactly what you get.

Though that plight persists, the emergence of participatory art in the late 1950s and early 1960s shook things up. One of the artists who sought to transform the process of viewing art into active participation in its creation, Jeffrey Shaw developed a practice that riffed off the technological developments of the day. Anyone who approaches his work is meant to handle the apparatus he designed and built – clunky monitors (now slimmed down), stationary bicycles (now more robust), dials, knobs, switches, sensors.

Shaw has been based in Hong Kong for 11 years. In 2009, he joined City University of Hong Kong as its chair professor of media art, and was dean of the institution’s School of Creative Media until 2015. Before that, he was the founding director of the ZKM Center for Art and Media Karlsruhe in Germany, and co-founded the iCinema Centre for Interactive Cinema Research at the University of New South Wales in Australia, his home country.

A solo show for Shaw in Hong Kong was long overdue. WYSIWYG at Osage Gallery draws on 50 years of his artistic practice and includes objects from decades of hardware experiments as well as works that have been modified with new, smaller components.

In computer parlance, WYSIWYG, which stands for “what you see is what you get”, refers to a user interface where the layout on a screen is exactly what will be printed on paper, with the monitor displaying font effects and line breaks accurately. It was an important step in personal computing, one that made word processors more accessible to people without specialised training, fundamentally changing how humans interacted with what was new technology at the time – much as Shaw’s art draws in viewers, prompting them to physically interact with his works.

Golden Calf (1994/2018) stood at the centre of the Osage show – at the “axis mundi” of the exhibition, the artist said during a tour of it. An iPad rests on a plinth. Pick it up and the tablet’s camera detects patterns on the marble slab set on the pedestal to generate a three-dimensional rendering of the work’s titular object. Move around, and the image continually renders in real time, including reflections on the polished golden surface of its surroundings, produced by interpreting visual data piped in through four cameras set within the plinth.

Golden Calf brings together a couple of ideas. One is a direct biblical reference to the cult image that was made by the Israelites when Moses ascended Mount Sinai. The fact that it is presented in augmented reality calls to mind the frothy venture capital poured into tech startups that have a deep vocabulary of techno-marketing speak but no plans for sustainable businesses, as well as claims that the most valuable resource is no longer oil but data – virtual slivers of information that describe our movements, habits and personalities.

Another concept embedded in the work is our relationship with technology. To fully experience the work, we need to handle the tablet, aim it properly, walk in a circle and view it on a screen. The original iteration of Golden Calf involved a clunky 13-inch monitor with a sign that read “pick me up” attached to it, because people weren’t used to handling visual output devices in such a way a quarter-century ago. This arrangement augured the prevalence of “black mirrors” in our lives, as well as our dependence on such devices to remain connected to other people. Though originally intended as a playful system, handling the iPad in Golden Calf can be a disorienting experience. Accessing the work requires situational awareness in physical space combined with attentive mental focus on a virtual environment. Our gaze is never meant to leave the “statue” of a false god.

Another of Shaw’s works, Virtual Sculptures (1981/2019) also requires viewers/participants to experience the installation on circular footpaths. As one of the world’s first augmented reality art works, it was an exercise in fusing tech with art, featuring a design that prompts the viewer to take control and operate it. A CRT monitor is mounted on a tripod, screen side up. Using a Fresnel lens and a semi-transparent mirror, graphics generated by an Apple II computer – including wireframe images of a cube, and a plane from the first Flight Simulator video game – are projected into our physical space, viewable only through a black box that is on top of the whole setup.

At Osage, the tripod was placed within a blown-up Cycloramic photograph produced by Hong Kong photographer John Choy depicting the city’s central business district without people shortly after 6am. The names of businesses including luxury-brand shops and bank branches have been removed, with the spaces left blank, though reflections of their logos and signs remain on glossy surfaces. Other traces tell us what the city is going through: a makeshift roadblock remains on a road that is normally packed with traffic, and Chinese graffiti reads “Hong Kong add oil”, a popular slogan that is posted on social media, painted all over the city and shouted out of windows at night.

Like Golden Calf, viewers are compelled by the setup of Virtual Sculptures to grip the work and move with it. Take it to the right bearing, tilt it to the proper angle and look into the box, and you’ll see the computer-generated fragment “FUTURE?” floating before the vacant street. That graphic was present in the original work too, but its latest iteration taps into new uncertainties and anxieties that have emerged in Hong Kong.

The interplay between work and physical input continues in Eavesdrop (2004/19), which the artist calls a “film that is not a film”. Step inside and you’ll find a mounted projector ready for you to rotate and aim at a cylindrical projector screen. Depending on where the projector points, a different narrative unfolds and the viewer, peering into a club, eavesdrops on conversations between pairs of characters, including a mafioso and his puppet lover, an older married couple who pretend that they are strangers, and a journalist and his interview subject – a revolutionary or terrorist who blows himself up after nine minutes, killing everyone in the club who is still alive at that point (the older couple kill themselves beforehand). The video loops back to the beginning, and we realise that two men seated next to each other are aware that, for all who are in the premises, time folds onto itself. They need to relive their deaths over and over again, dying every nine minutes.

Though time carries the narrative forward, the viewer determines what information is revealed. It’s like a video game controlled from a first-person point of view; there is a narrow, limited field of vision and sound, and we are forced to abandon all sense of periphery. To piece together the entire scene, we need to be nimble and direct the projector’s lens to different portions of the screen.

Other works in WYSIWYG demanded viewers’ participation too, like Fall Again, Fall Better (2012), where we step onto a mat to make digitally rendered puppets collapse; or Legible City (1989–91), where we pedal on a stationary bicycle to navigate Manhattan, Amsterdam or Karlsruhe, reading text along the streets that forms stories about each city. And in Recombinatory Poetry Wheel (2018), we twist a knob to splice together snippets from poems by Singapore’s Edwin Thumboo, recited by the man himself. These works only function properly if we contribute.

Shaw uses technology to drive home the point that art is your business too: that it doesn’t need to be something haughty, housed in sterile, bleak, imposing environments. Perhaps this is best encapsulated by Waterwalk (1969/2019), a PVC tetrahedron filled with air that people can step within and traverse the surfaces of lakes, rivers and oceans. It was a project by the Eventstructure Research Group, of which Shaw was a member. At Osage, the artist showed footage of the original demonstration in Amsterdam in 1969 on a boxy CRT monitor, as well as of a restaging during the 2019 Venice Biennale on a much thinner LCD screen. Everyone who tried it emerged from the bubble with a cheek-to-cheek grin. How could they not? Art had just literally given them the chance to walk on water.