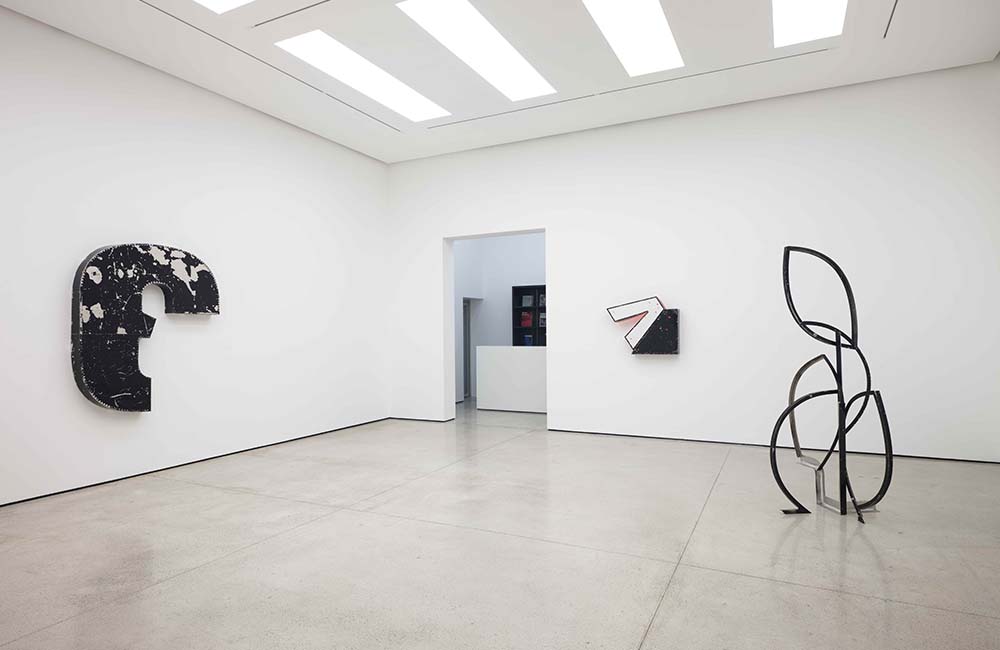 Signs of the Times / By Christina Ko /

When you are dealing with works as large and savagely stark as Virginia Overton’s installations, it’s easy to reduce the importance of a scattering of pieces on paper, which might initially seem to be simply two-dimensional precursors or stylistic explorations that precede their sculptural siblings, forged of aluminium and light. To many artists, paper is usually just a canvas, its function no more than to support the paint that sits on top of it; to Overton, it is a material with a history and significance equal to that of the salvaged aluminium that forms the rest of the pieces.

Overton’s practice is not defined by any overarching message or cause, and, by her own admission, defying categorisation can be “problematic” in a world that loves a pigeonhole. But if there is a connective thread, it is that she works exclusively with salvaged materials, and that respecting the past life of said materials is an important aspect of the process – whether they be her go-to industrial fodder, such as a pick-up truck that’s seen better days, a Dan Flavin-esque neon tube light, a music composition or something even more innocuous, like books. “Consistency for me is more based in being aware of and inclusive of the space and material, and creating gestures thinking of those in combination,” she says.

In the case of the works on paper, Overton used blank books, prototypes created by a book designer friend to judge the look and feel of a finished product, but ultimately destined for the recycling bin.

“He gave me a bunch of boxes of stuff, and in it were these letter sets and these vinyl sticky letters. So I was cutting them up and making various compositions, and never really thinking much about what I was doing, kind of letting it flow – it kept me active at times when I was relegated to a small space or travelling,” she says.

“I taught some beginning-level sculpture at a university here, and I said to the students, ‘I want you to pick a monograph of any artist, from any time frame, but I want you to be driven by the book itself: how does the book feel when you hold it? Is the paper thick? Is it easy to flip through? Everything about it as an object. We’re thinking about books as sculpture, in a three-dimensional space.’ That was an interesting conversation to have with these students who are new to making sculpture and 17, 18, 19 years old. I do think of books as sculpture.”

Overton works with many materials concurrently, in series of experiments that prioritise exploration over output, so after she found the aluminium signage debris in the middle of a field near her home in Tennessee in the southern US while driving one day, she didn’t have an inkling even when it arrived at her studio that these two diverse materials might become partners in crime at her show in Hong Kong’s White Cube, which also happens to be her first solo exhibition in Asia. “I was just really intrigued by it and the fact that it had been such specific signage with specific meanings,” she says. “Dismantled, cut apart, and when I found it in a big pile in a field, it certainly wasn’t this pristine message of power on a high rise. It was in its twilight stage, headed for a metal scrapyard.”

Eventually, the link revealed itself, and the final pieces are unified in that they subvert a very fixed design language – that of typography – in creating new forms of life that retain vestiges of their past selves, whether it is in the curve of a serif or more overt representations; for example, the letter V is consciously left decipherable in Untitled (V).

“I wanted that to continue to be a piece that could be understood, and add to whatever was the new object I was making,” she says. After all, materials do have their own inherent personality – “[they] have things they like to do, things they don’t like to do. You can melt them and they become liquid, or they might burn and won’t turn back into what they were. It’s just ash and charcoal – although that can serve a purpose, too.”

Overton isn’t just interested in the past lives of her materials, inherent imperfections included – usually even glorified. She acknowledges that they grow and change in context and meaning as they move on from her studio, whether to places of exhibition or to collectors’ homes. “I have ideal ways that I like to see work installed and shown, but as soon as others lay eyes on it, that interpretation changes. It’s a mode of communication for me, making art and sculpture, so I do my best to get that right when I’m doing it, so that when I put it out there, it will hopefully maintain some of that.”

What she does goes beyond change of context, although that is important because her process involves quite a personal, intuitive response to space and architecture. Some past works have also literally changed, such as Late Bloomer (2018), a truck filled with aquatic plants that evolved organically throughout its installation period. To her, that seems as natural as a conversation: “Conversations are these creative organisms that are particular to the people speaking and all the other things that are happening around those particular people, so [even] that is interesting,” she says.

Overton singled out White Cube’s Hong Kong space as a point of interest for a show when she first joined the gallery’s roster. Her first visit to the city came in the mid-2000s, when, as part of a competitive dragon boating team, she travelled to Malaysia for a race, and ended up in Hong Kong for two weeks afterwards. Something of a nomad who grew up in Tennessee but has also lived in New Mexico, North Carolina and now New York, she fell for the unique vibrancy of the city, and the way it transformed with the rise of the moon, bold neon signage lighting the darkness.

When it transpired that she wouldn’t be able to travel before the exhibition and potentially source materials here – she has a naughty habit of creating work on site at the 11th hour, a practice she says gives her focus and her friends anxiety – it seemed logical that as her version of a response to the city, she might instead work with billboard-sized lettering, of the scale and ilk that so struck her on her first visit.

It also seemed logical to title the show Alone in the Wilderness, a reference to the state of the times but a title that also has many other layers. Contrast it with the name of her Zurich show in autumn 2019, Fresh Hot Pizza, exhibiting pieces from the same exploration with these large letters. “It was the first time I had shown any of it, so it was like, here it is! Hot from the oven. It’s a gathering of people, and everybody’s going to have a little bit,” she says.

“[Now, by not coming to Hong Kong, I’m] missing that opportunity of engaging with people who are familiar with the space, familiar with the surroundings” – an engagement format she considers as much a part of the making of the work as collaborating with engineers or other experts on large-scale projects she cannot execute alone.

“[Alone in the Wilderness] is the title of a documentary that I grew up watching. It was a documentary about a man who removed himself from society entirely and built a cabin in a very remote part of Alaska; he intended to be there one year and ended up there for 30. He had a friend with a seaplane which would land there once a month and bring him very specific supplies and then he would send these reels of film and photos back. It was this amazing thing, because the remote wilderness of Alaska was documented in a way that nobody else had ever done, over a 30-year period. And it felt apt for me because every time I do a show, I feel I am entering into this wilderness, this unknown. And I am bringing myself to that thing. It quickly becomes an engagement with other people, but there’s an element of it that is me doing my own thing in the wilderness – and this show sure felt that way.”