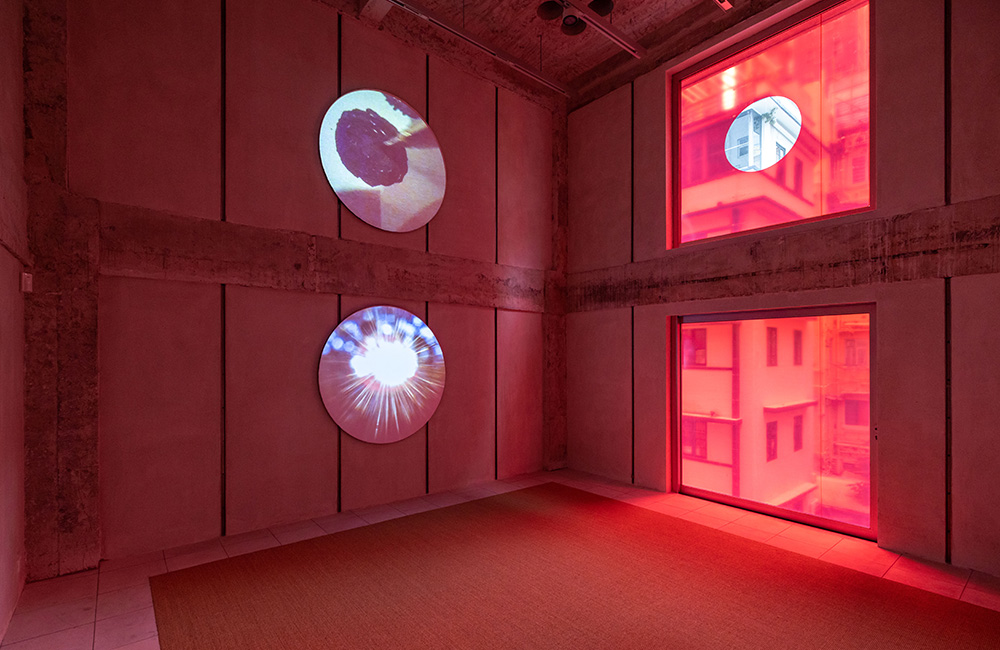 Six years after his first solo exhibition at Para Site, Apichatpong Weerasethakul has come back to Hong Kong to present his recent artworks at Kiang Malingue Gallery. The Thai artist and film director has played with the gallery’s unusual architecture, filling its high ceilings and empty spaces with haunting presences, widening hitherto invisible fault lines and holes from which the mind can easily flee away. Conceived as a calm, meditative exhibition, A Planet of Silence gathers an incredibly rich array of works from different series, reflecting the multiple experimental approaches of the artist’s practice.

It opens with A Minor History (2021), Apichatpong’s recent series of photographs taken in Isan, Thailand’s northeastern region and the artist’s homeland. He travelled there during Covid, along the Mekong River, staying in different hotel rooms that he photographed. The departure point of his journey was a piece of news about the murder of two political dissidents, whose bodies were found in the river. However, many more issues coalesce in this eerie series, which portraits the Mekong as a witness and a manifestation of the current changes that affect both people and the environment. The apparent serenity of the images, and the stillness of the surface of the river, conceal many untold stories and an underlying, invisible violence.

Mekong, a Quiet Phantom (2021), for instance, features a bleak, grey landscape as seen from the inside of an empty, abandoned hotel where the artist used to stay. The image, like most of the photographs in this series, is presented upside down. The stairs lead to nowhere but participate in the architectural composition of the scene, with the windows resembling two screens that frame the landscape. Outside, the sky seems loaded with pollution, its pale colour matching that of the river as they almost melt into one another. Everything is still and time has been suspended, as if all the people had left the place. Recently, the region has been suffering from the impact of climate change and the construction of dams upstream that deeply alter the local ecosystem and deprive the population of food. One can easily feel the haunting presence of ghosts roaming around these empty, deserted places.

Apichatpong’s poetic personal artistic language always transcends but also illuminates the context in which he is working. In Isan, the hotel rooms offered him a space to dream and to expand the reality he was facing. In general, sleep is a way for him to unlock the power of imagination and escape the real. Most of his artworks create passages and open gates toward emancipatory spaces: in dreams, people have the freedom to create their own world. Sleep, bed sheets and intimate rooms are recurring themes in his practice, while plays of light, shadows, patches of sunlight, hollow spaces and holes are the means through which he invites viewers to puncture reality. “Sleep is a weapon,” he said during his artist’s talk at the gallery.

Dream of Illusion (2022), from the same series, shows crumpled sheets on an empty bed. They echo the shape of a long curtain that divides the view from the hotel room. The photograph is a collage featuring the ruins of a cinema and different shots of the hotel rooms, including a copy of Mekong, a Quiet Phantom that seems to have been hung from a wooden beam. Each square of light, window and architectural structure resembles a theatre set that an invisible mind has conjured up. These lines play perfectly with the gallery space, its hollow corners, concrete cavities and many stairs. Trained as an architect, Apichatpong is very sensitive to the way spaces delineate visual perimeters that we use to partially grasp the world. Conceived as an extension of the eye, his camera constantly frames, cuts and selects pieces of reality that he often superimposes.

The installation Durmiente & async (2021) is a diptych of two videos: on the left, a long shot shows the British actress Tilda Swinton sleeping on a bed during the shooting of Apichatpong’s last film, Memoria; on the right, the artist’s collaboration with composer Ryuichi Sakamoto features other people asleep and recurring images of a crowded theatre, a sea sunset and travel scenes. The minimalist music, like a caress, and the flow of bright light accompany the protagonists during their metaphorical journey, crossing the borders of reality and life.

Most of Apichatpong’s artworks are presented in duo format, with two images or videos in dialogue with each other. This duality allows the artist to think about complementarity and contrasts while suggesting points of encounter. It reflects his attempt to bridge various aspects of reality and to explore their potential for mutual metamorphosis. In his work, things constantly transform and melt. In For Bruce (2022), for example, carpets of fallen dead leaves fuse with the water of a river, pebbles mix with trees, and the riverbed, although shallow, seems unfathomable as it absorbs the light of the sky.

The double-channel video installation is a homage to Bruce Baillie (1931-2020), an experimental filmmaker who greatly influenced and inspired Apichatpong. The artist himself had a strict education, and the organic, intuitive films of Baillie incarnated a form of freedom for him. For Bruce summarises his feelings and his journey as an artist. It features a bridge over a river in the jungle in Peru, with a background of natural sounds. The plans constantly overlap with sensuality, creating depth and ambiguities. While the river embodies fluidity and a permanent state of mutation, the figure of the bridge represents the possibility of linking various spatial or temporal territories without belonging to any. This idea is fundamental for the artist, as well as for Baillie, who attempted to embrace all forms of reality without taking sides. Since nature is all about transformations, how can art, which tends to be fixed, convey or embody these mutations?

In Apichatpong’s poetic works, natural elements seem to be inhabited by a breath. Rocks vibrate, leaves palpitate and water radiates, while light constantly blurs the outlines of things. Perhaps unknowingly, he attributes human dispositions and magical agency to non-human beings, depicting a spiritual, inclusive world in which all elements interact, including life and death. Growing up in a very superstitious family, animism has always shaped his vision of reality, although he has quickly understood that, as with any religion, this system of beliefs could be used to control society. He thus remains very wary of this vision of the world, while drawing on it for inspiration.

Recently, the artist has explored another mode of expanding reality: the series A Conversation with the Sun (2022) involves images generated by an algorithm in response to key words he selects, such as “fabric”, “violence”, “blood” or “corruption”. Most the images feature creased pieces of white fabric, burnt in places, that recall the artist’s typical bed sheets or curtains. On the top of the photographs, Apichatpong has drawn simple figures with a white marker, as if to reappropriate the work or start a conversation with the algorithm. For On Cinema and the Sun (2022), for instance, tiny silhouettes sit along a line, all turned towards a rectangular screen and a sun. Again, illusions and reality coalesce in this almost platonic staging that suggests an infinity of layers beyond what we perceive as real.

At the very top of the stairs, two final artworks face each other: the photograph Of Love, Of Lights (2022), featuring a large black screen hanging from an abandoned outdoor structure; and a simple, written canvas that reads “The Word Silence Is Not Silence”. The first one refers to the 2020 student protests in Thailand, with the screen pierced by thousands of flashing lights created by the students’ mobile phones. The second seems to invite us to distrust the shortcuts of language and to be attentive to the world in order to seize on its faintest quivering. Apichatpong’s multisensory artworks certainly sharpen our sense of observation and create space for individual emancipation and infinite poetic wanderings.

A retrospective of Apichatpong’s films and some of his short diary videos are also on view at the gallery’s other space in Tin Wan.