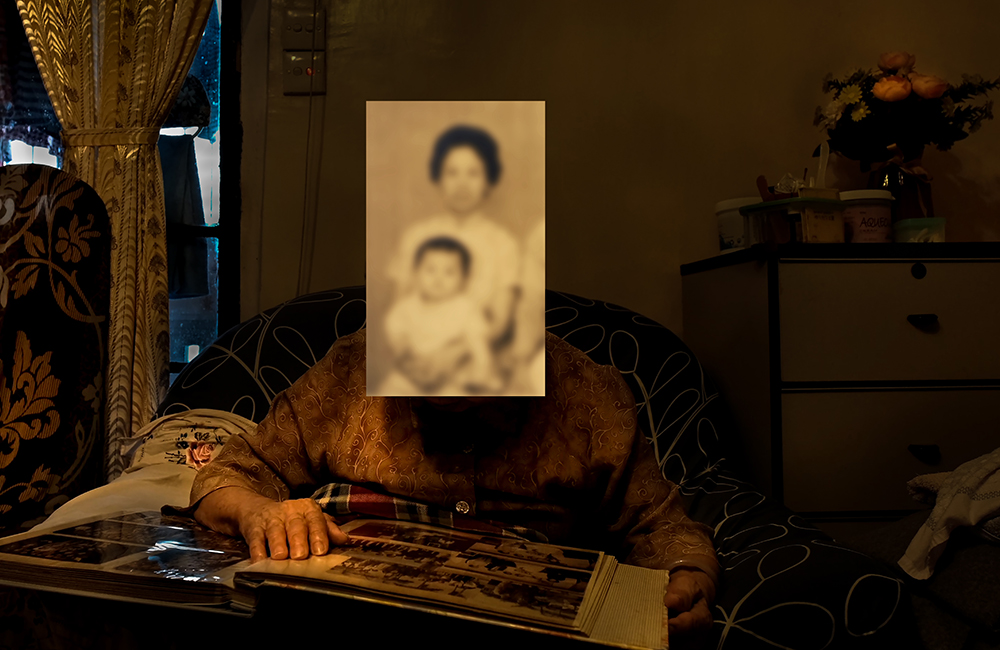 Sharon Lee’s practice explores and questions photography as a medium. Inspired by her family life and by the everyday, the Hong Kong artist experiments with various techniques, textures and materials to mould the blurry remains of memory, poetically capturing the slippery layers of time. Her work revolves around the notions of absence and disappearance as tangible and often constructed presences.

Caroline Ha Thuc: From the start, you have explored photography in association with various modes of printing, including ceramics. Where does that come from? Sharon Lee: I use photography; meanwhile I do not conform to photography. I embrace alternative image-making as a form of negotiation, not necessarily with a single photograph but with the history, culture, art, science and technology that it carries.

I started photography when I found myself with no resources for art making – no studio, no art supplies but a 55-sq-ft shared bedroom. I find the medium a great tool to construct a visual reality. It frames and unframes, hides and reveals simultaneously.

I was in Vienna for an academic exchange year in 2014. I only had classes in art history, but I sneaked into the art studios of another university, seizing chances to create. As a nomad, I gained access to the ceramics studio, which is open to students from all disciplines. This led me to consider ceramics and moulding in a broader sense, and built my sensitivity to materials. I also sat in a course on typography, which brought me to the printmaking studio. This is how I developed my first artwork: Genesis.

CHT: Genesis (2016-17) was a very original project, inspired by the Bible, with abstract photographs in a book format. Was it an invitation to contemplate the origins of the world? SL: [Philosopher] Jacques Rancière in The Future of The Image (2003) raises the question: “Are some things unrepresentable?” Is a real god unrepresentable?” I grew up in a Christian family and went to Christian schools. In Protestant Christianity, there is no figurative representation of Jesus. Only an empty cross represents him. He is made visible in absence.

In Genesis, I attempted to explore this notion of the unrepresentable. The work juxtaposes some abstract and trivial images of an egg with the Book of Genesis on how God created the universe in seven days. The images portray the transformation from formless to form. The magnification of the micro depiction of an egg projected a “universe”. The glitch between the two representation systems, the text and the image, records a trace of the unthinkable. The photo-etching printmaking transforms the images into a form of relief with high texture.

When I look back, I can still find shadows of this work in my current practice – the tactility of images, the presence of absence, a history of the future.

CHT: You explored this concept further in The Crescent Void (2019), a series of photographs featuring the imprints of found objects from grocery stores. They evoke and embody Man Lee Store, the small shop that your grandparents used to run in Chai Wan in the 70s. For this work, you combined photography and moulding, creating a constant tension between positive and negative spaces, emptiness and materiality. Is this piece a way to push this past back even further in time? SL: Yes, this is the way I attempt to negotiate with the sense of time in photography.

My process of moulding is more that of an erasure or an extraction, and also a detour. It slows down the photographic process and time. Literally, it is an “image-making” endeavour.

The outcome of this process of rephotographing questions the image, especially when I have the image output in 1:1. Is it an image? Is it an object/sculpture? Is it a presence? Is it an absence?

Spatial history is layered: the existing layout, structure or architecture tell you the bygone – what was there. I am drawn to absence and different forms of disappearance. My work is honest and directly presents the void. This is not a Cola. This is an absence of a Cola. All these objects point toward the absence of a space, a bygone local store.

I am trying to construct a subtle irony with the in-betweenness. The image looks familiar but distant, ancient yet futuristic. I also play with photographic time in my process of making, first by moulding the objects, then by rephotographing the mould. The process cancels out the “decisive moment” in photography.

CHT: For your latest work, The Remnants of Yesterday (2022), you were inspired by your grandmother’s cheongsam, from which you created a mould. This time, though, you have used porcelain to produce this series of gelatine silver prints. Why did you change material? SL: The choice of the material is related to the context of the work. When I tried to revisit the place, Man Lee Store had already morphed into a run-of-the-mill concrete wall structure facing an underground train station. I created these futuristic pseudo-fossils of these mundane objects in concrete, imagining that archaeologists will find them in the future.

In both works, I used a void or traces of the object to create images. For The Crescent Void, I used a photo negative in the representation of the mould. In reversed light and shadow, the negative space is re-presented in a negative image, giving an illusion of presence.

Concrete is bulky but in fact porcelain is solid and dense even though it looks very delicate. In The Remnants of Yesterday, I regard porcelain as a material to approach memory as a vulnerable yet rigid entity.

In both east and west, there has been a long history in using porcelain as a carrier for photographs, mainly portraits. The two media embrace timelessness with a memorial purpose. I try to bridge them in an alternative and experimental way.

CHT: How do you do that? There is a strong sense of materiality and craftsmanship in your work. The piece is broken and opens like a scar: when you made it, why did you keep it? SL: I directly imprint the cheongsam onto the porcelain clay slab in tracing the details of the object as a relief. The porcelain plate is so thin, only 1mm thickness; therefore it has a translucent quality.

I used this translucent porcelain plate, like a film, for creating gelatin silver prints. When the light passes through the porcelain relief, I found interesting imagery, like an X-ray impression, unveiling the internal essence of the object. To me, it is like recasting with light. Furthermore, I experimented with the traditional darkroom technique of solarisation, as a way to create variations on the same motif in repetition.

It is a highly time-consuming, slow process. I abandoned the rapidity of camera and embrace a stubborn method. The firing process accidentally created this cracked piece, that embodies well the fragility of the story behind the work. Therefore, I decided to choose this cracked porcelain plate over all the perfect ones which took me a dozen attempts. The brokenness and the openness are complementary. I saw grandma struggling with a void in her memory. The work explores the delicate relations between the attempts to recall and the memories one can hold on to.

My projects are often inspired by found images, from the family album or historical photographs. As soon as I found this handmade cheongsam of grandma’s featured in the first family photo, I wanted to develop a project with it. I discovered that a poetic connection between my family history and the textile industry of Hong Kong in the old days was woven into this specific object.

CHT: The work features the cheongsam that belonged to your grandmother. For you, does this piece of clothing embody the collective memory of Hong Kong? SL: Honestly, I am quite skeptical regarding the concept of collective memory, as it sounds so coded and packaged to me. I am not interested in any empty representation of cultural symbols. I look for micro-narratives in the grand historical representation.

My grandfather owned a small textile factory in Kowloon City in the 1960 and 70s. Beautiful clothes were exported to America and worldwide, while my grandmother would use the fabric remnants to make clothes for herself and the family.

CHT: Yet you are also participating in its construction through the production of cultural images. SL: I do not intend to escape from the collective memory, as it is part of the culture. Memory is unique, even in a collective experience.