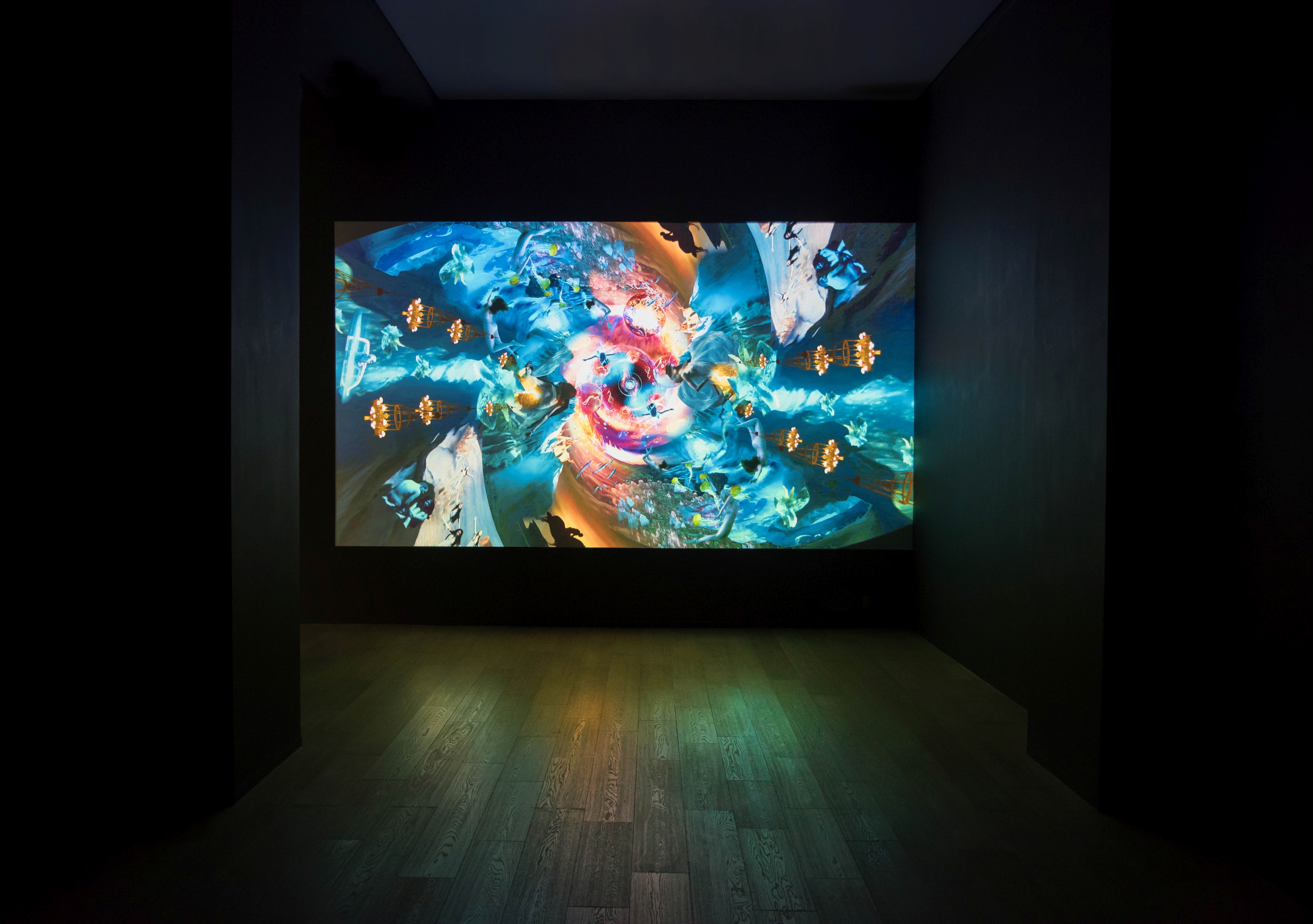 The merry-go-round symphony of Prokofiev’s Cinderella Waltz sweeps you up into a dizzying vortex of imagery. Fragments of Hollywood films – culled from the The Sound of Music, The Big Lebowski, Eyes Wide Shut, the Austin Powers films, The Terminator and more than 400 others – dance past in a frenetic choreographed collage of totemic tableaux depicting heaven and hell. Good and evil are informed by popular culture: a horned red devil and a fire-and-brimstone orgy of naked bodies writhing atop one another versus fluffy kittens, unicorns and Julie Andrews. You are still and weightless, floating in the middle of it all like an astronaut, watching the imagery orbit around you in a repetitive cycle that recalls Dante’s Divine Comedy juxtaposed with Charles and Ray Eames’ films Powers of Ten. This is Marco Brambilla’s Creation (2012), a four-minute virtual-reality spectacle. Visual whiplash is guaranteed.

Virtual reality takes us beyond the confines of the television screen and right into that screen, broadening our sensory engagement with sound and vision. It promises a utopian expansion of our experience, allowing us to engage in ways we cannot in real life. Stepping into Creation, the viewer feels like they’ve been sucked into a spinning ad on a screen, in which everything is being sold to you everywhere at once: sex, happiness, salvation. Content is beside the point; this is all about images. It is an overwhelming microcosm of spectacle. In a capitalist economy based on images, “the freedom to consume a plurality of images and goods is equated with freedom itself”, writes Susan Sontag. As the viewer in Creation – with VR, the only point of view is your own – you are free to look at whatever catches your fancy, and there’s a lot to feed a rapacious appetite for imagery.

Yet the sensory overload to which Brambilla subjects his audience isn’t a celebratory carnival. It is alienating and emotionally empty, a hermetically sealed digital world cut off from reality. That is its point. It highlights that rather than having freedom, we have unwittingly submitted to a visually dominated culture. Rather than being liberated, we are instead imprisoned by our insatiable desire to consume more novelty, more imagery, a bigger and better spectacle. We are a society of spectacle (how else do you explain Trump?) and second-hand experience. We possess and experience the world through imagery: through our cameras, smartphones, social media, magazines, films,
advertising and video games.

The image becomes a substitute for memory, real experience and reality. But to see the world through imagery alone is to dissociate ourselves from it. In Creation, the world is codified through symbols amassed from mass culture’s main instrument of dissemination – Hollywood – and fed to us on a loop, resulting in a never-ending purgatory where all we can do is consume. The technology allows Brambilla to draw attention to the constructed nature of our contemporary consumerist culture, and comment on our role as passive consumers of imagery. Brambilla satirises our relationship to a consumerist, visually driven culture and prods us to question how it frames our understanding of reality. Through the constant, exhaustive – and exhausting – bombardment of and saturation with images, Brambilla holds up a mirror to our world.