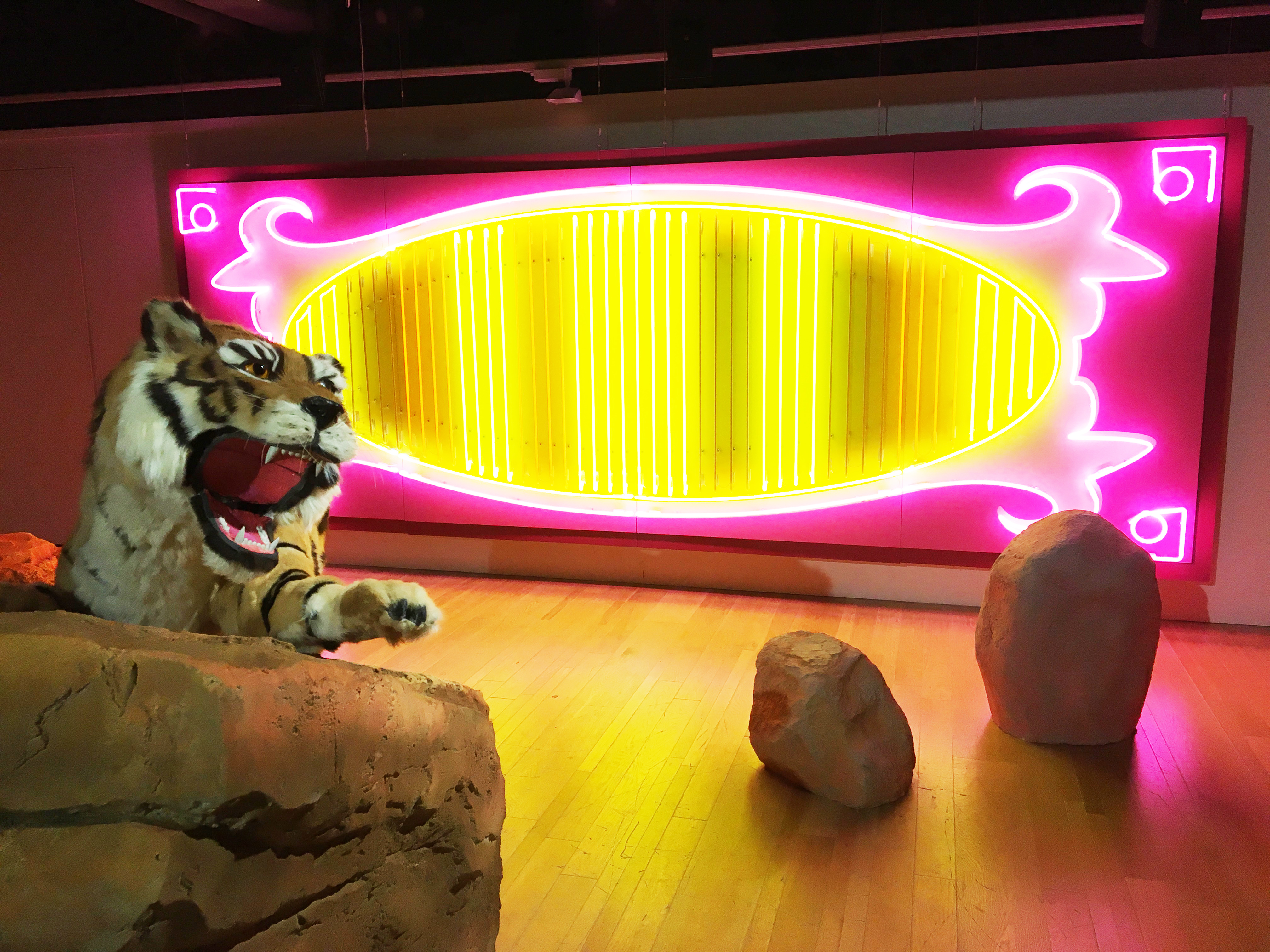 The Tiger Returns to the Mountain

Chinese-American artist Adrian Wong’s site-specific installation The Tiger Returns to the Mountain, presented at chi art space by the K11 Art Foundation, takes the former Tiger Balm Garden as its locus of imagination in deconstructing Hong Kong’s cultural history. The historic garden, on whose site a luxury residential complex now stands, is a palimpsest of Hong Kong’s cultural history — a site whose every reincarnation throughout the previous decades, whether as private residence, theme park or repository of psychedelic statuary, has effaced its own past while leaving indelible marks, tracing the city’s existence from colonial times to the present.

The title alludes to a Chinese expression that means “allowing someone dangerous to roam again”, but the titular tiger’s identity is left ambiguous. As viewers navigate the large-scale work, which mixes multi-sensory and Chinese architectural elements, they are invited to consider this question while engaging with Hong Kong’s layered history from different vantage points.

Artomity: How does the installation take advantage of chi art space’s size and shape?

Adrian Wong: When visitors enter the show, they see a portal — a small gateway modelled after a classical garden arch, like something in a Suzhou garden. With this as the picture plane, the exhibition appears quite pictorial. Upon entering viewers become part of the image for subsequent viewers between two planes of light. At the front green neon radiates towards the rear, while a large neon installation wafts pink and yellow light back towards the front. In between is a series of large simulated rock sculptures taken from images of Tiger Balm Garden over the course of its history. Few of these rocks existed in the garden at the same time, but they share a common lineage. At the centre viewers face a cliff-like structure with a tiger atop it. The tiger is animated to sing the controversial song Hong Kong by Screamin’ Jay Hawkins, recomposed for traditional Chinese instruments for the exhibition.

The point of entry of the show suggests a more traditionally fixed view, but as visitors enter deeper they are allowed greater freedom. Near the back wall the sound of the neon is very pronounced, calling to mind the experience of street life. From the front that hum is almost completely drowned out, and the mood is more akin to being in nature. Staring into the tiger’s mouth from beneath it could appear fearsome, but from across the room it could appear cartoonish. I hope viewers take advantage of this.

The Tiger Returns to the Mountain, detail. Courtesy the artist and K11 Art Foundation.

What inspired you to use Tiger Balm Garden — a symbolic record of decades of development and preservation — as a starting point?

Although my direct experience of Tiger Balm Garden was only fragmentary, I feel like I’ve visited many times. I see echoes of it all around me, not only in Hong Kong, but also in its simulations in Chinatowns, banquet halls and cultural centres the world over. I wanted to get to the bottom of the garden’s ineffable energies. I thought the most direct way of doing this was to reconstitute it in some way.

The tiger could be a symbol for the collective experience of the city’s inhabitants, a proxy for the original visitors to the garden. It could be a proud symbol of the spirit of Hong Kong itself, of the Orientalising tendency of theme parks, or even of my own experience, returning here as an expatriate.

The Chinese title of the show alludes to releasing someone dangerous “back to the mountain”. How does that play into the work?

The question of who the tiger represents is purposely unspecified. One could read the tiger as Hong Kong released by China – or later by the British. It could alternatively be the release of the colonisers themselves. More personally, it could be the release of the diaspora and the later return of overseas Chinese to Hong Kong. I like that indeterminacy as a vehicle for engaging with the work.

How do Tiger Balm Garden and its reincarnations embody Hong Kong’s unique existence as a place where east meets west by necessity, due to arbitrary historical forces?

For me, the crux of the problem lies in the idea that Orientalising is not a subject worthy of analysis: that the reduction of authenticity does not ever create its own kind of authenticity.

I think the phrase “east meets west” clings to the idea that there is an equal footing when cultures collide. When east meets west, west wins, but I think Hong Kong is a place where east has co-opted west – and Tiger Balm Garden is an instance of that. Amid the mish-mash of Asian traditions, styles and shorthand for Chineseness that abounded, something authentic emerged.

Does your background allow you to look at Hong Kong’s colonial history and post-colonial struggles in a special light?

I was born to Hong Kong-born immigrants to the US, but my childhood was marked by a strong desire from my parents to assimilate into American culture. My only access point to my heritage was through a piecemeal construction of anecdotes, family photographs and the idea of Hong Kong as transmitted through film,

literature and cultural artefacts. When I moved here in 2005, I was thrust into a world that had previously existed as a sort of fantastical space. This allowed me a privileged view into the discontinuities and problems of a city that once self-defined as the gateway to the Orient.

The introduction to the exhibition says that your work “investigates the city’s ambivalence towards heritage preservation derived from conceptions of the Orient”. Does this ambivalence stem from discrepancies between many Hongkongers’ view of their city – a fairly homogenous, Cantonese-speaking society – and western conceptions of it as an international metropolis?

I think this ambivalence is tied to the city’s history of leaning in to ideas of the Orient as a means of building its internationalness. One needs look no further than the Hong Kong

Tourism Board’s past slogans, such as The Riviera of the Orient. It could be argued that this reductive approach fails to capture the true spirit of Hong Kong, but I think that it is an inextricable part of that very spirit.

The blurry line between locality and authenticity can be found in the popular films produced by Shaw Brothers Studio, and dubbed for foreign markets. With more dubbing than it could handle, the studio often assembled unscripted sequences shot out of order to make films in the 1960s and 1970s. English speakers were flown in to write dialogue to match the movement of actors’ lips. While most were rife with anachronisms, these films are quintessentially infused with a Hong Kongness.

Hong Kongness remains elusive. It lives in the limbic system, somewhere in the space between breaths. It is the product of a particular combination of sounds, smells and flashing lights. This was the entry point of my decade-long exploration of the city. It’s something I’m trying to summon in the current exhibition.