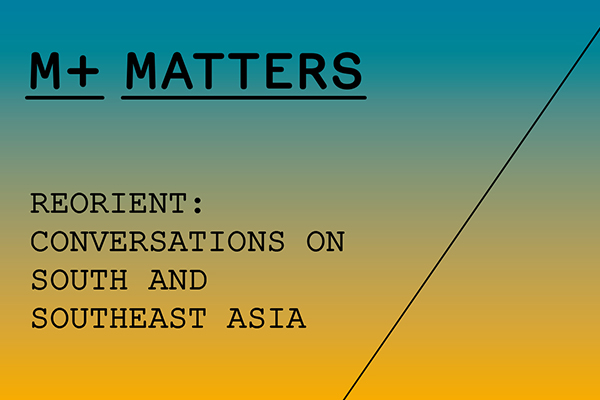 REORIENT is M+’s first public event to focus exclusively on the region of South and Southeast Asia. From its early stages of formation, the M+ collection has encompassed works by South and Southeast Asian artists and makers, but the region(s) have yet to feature prominently as part of the museum’s public programme. With REORIENT, M+ “reorients” attention southward by bringing together key practitioners, curators, researchers and thinkers from the fields of visual art, design and architecture and moving image, and from various locales in South and Southeast Asia, to present and discuss critical issues and multiplicities related to their practice, institutions and contexts. Designed to inform Hong Kong audiences about the important work being done by individuals and institutions in the region, REORIENT also seeks to examine affinities and intersections between cultural practices in Hong Kong and the global south.

Comprised of one-on-one conversations, short presentations and panel discussions, REORIENT is a three-day event designed as a platform to explore views across geographies (from Bangalore to Bangladesh, Yogyakarta to Ho Chi Minh City), disciplines (from visual art, design and architecture, and moving image) and initiatives (from bottom-up to institutionally-driven practices). The conversations and discussions between invited speakers and M+ curators would seek to address the following issues: how local and regional particularities and histories (as well as transnational and global forces and flows) have informed and shaped the nature of cultural ecology and production in South and Southeast Asia; how Hong Kong is culturally, historically and geographically situated with regards to the region(s); and how various curatorial and research frameworks undertaken by museums and cultural institutions in Asia, and elsewhere, have investigated art and design practices of South and Southeast Asia.