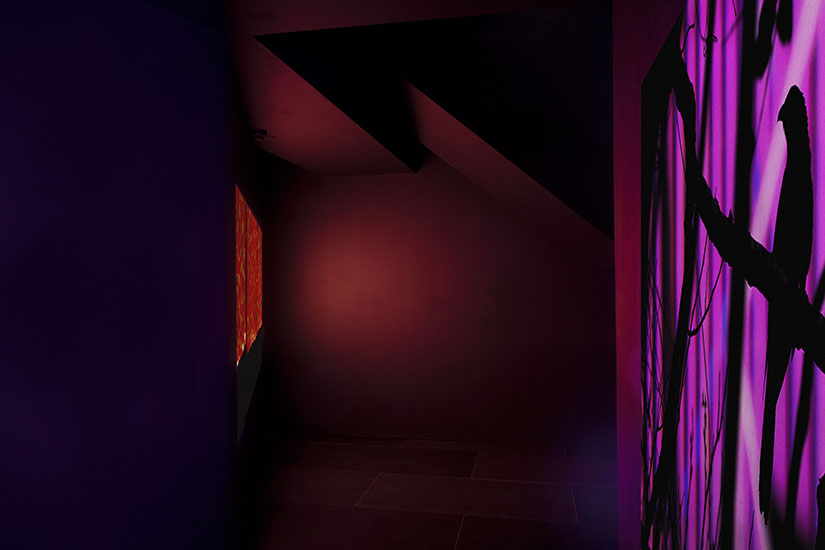 Two solo exhibitions, The Pearl of the Tailorbird by Rei Hayama and Memento Stella by Takashi Makino, took over the entire two-floor space of Empty Gallery. While both employ film, they provoke vastly different feelings and reactions.

Spread across two floors, The Pearl of the Tailorbird took viewers on a journey. Winding through the top floor of the gallery’s iconic dark void were walls spiralling inwards like a maze; as visitors navigated the barriers, it felt as if they needed Ariadne’s silver thread to guide them out of the miniature labyrinth. This searching and disconnection are symbolic of Hayama’s exploration of the human condition alienated from nature.

The layout itself was a structure within a structure, where perceptions were altered, and the spiral also alluded to other manmade or mythical cultural constructions of disorder, such as the Tower of Babel, from a biblical tale in which God punishes people’s attempts to build a tower to the heavens bycursing them with the inability to communicate.

However, simultaneously the spiral, commonly seen in the Fibonacci sequence, also references nature directly: from the spiralling helixes of DNA to spiders’ webs and birds’ nests, and from seashells to tornados and galaxies. But with all light except for the video installations removed, the audience is separated from these natural forms and left alone, their perception distorted with only manmade sound and technology to guide them, highlighting our reliance on these systems to make sense of our natural world when we are no longer able to communicate with our
environment.

The wandering motion from film to film, paired with the sound that could be heard throughout the space, suggested the act of searching and trying to grasp onto what we have left of nature as our bond with it breaks down. Turning each corner as the films unfold, we follow light from screens we can’t see and the sound of a bird, only to be met repeatedly by screens and speakers, and the realisation that the bird call is in fact Hayama imitating Hong Kong species. The multi-channel installation was created by Hayama during a brief stop in the city; after listening to the characteristics of the birds’ communication, Hayama translated it into dialogue using similar sounds in her native Japanese tongue. This act of humanising the birds’ language gives unexpected meaning to the creatures and the places they inhabit. Associations from this found language were then used to guide Hayama around Hong Kong, suggesting material and subjects for her films. The exhibition audio of shutter sounds from Hayama’s camera, paired with the bird sounds, created a back-and-forth song full of repetition and rhythm.

Hayama’s films come across as restrained but profound. Their imagery transcends time and space to create a deliberate distance between nature and the observer. This mysterious detachment reminds viewers of their own inability sometimes to see the bigger picture and to understand nature and our connection to it. In one film, The Pearl of the Tailorbird – Great Barbet (2018), water slowly floods in, submerging the floor tiles of a room, and daylight peers through a lone window in an abandoned space; these clips all speak to humanity’s disconnection as we try to tame the strength of the natural world, which can permeate manmade spaces where we have tried to block it.

Other installations depicting powerful rolling waves, dark rain clouds, close-ups of wet leaves, fish swimming and birds’ eyes function as quiet expressions of our individual loneliness as we remove ourselves from our own origins, and rely on modern means to understand our world. Hayama’s whimsical process of creation strikes a sensitive chord within us, prompting a desire to reconnect with nature. On the bottom floor of the gallery, Makino’s single, large-scale moving-image piece Memento Stella was pulsating and rhythmic, making the viewer feel as if they are being transported through a dense constellation or at the microscopic level of dust or even atoms.

With no apparent shape, the film featured material sourced from both nature and society during Makino’s travels to places such as the US, Europe, Japan and Hong Kong, crossing geographical and cultural boundaries. These images were layered, sometimes up to 200 at a time, shedding their physical forms and removing all connotations and function. The familiarity is
fleeting as the images quickly fade into an abyss of abstraction, making the screen feel full and empty at the same time, a paradox emblematic of the human condition.

Both solo exhibitions draw attention to our natural world, but while Hayama reminds us of our disconnection, Makino draws us into the shared origins and experiences of all living things.