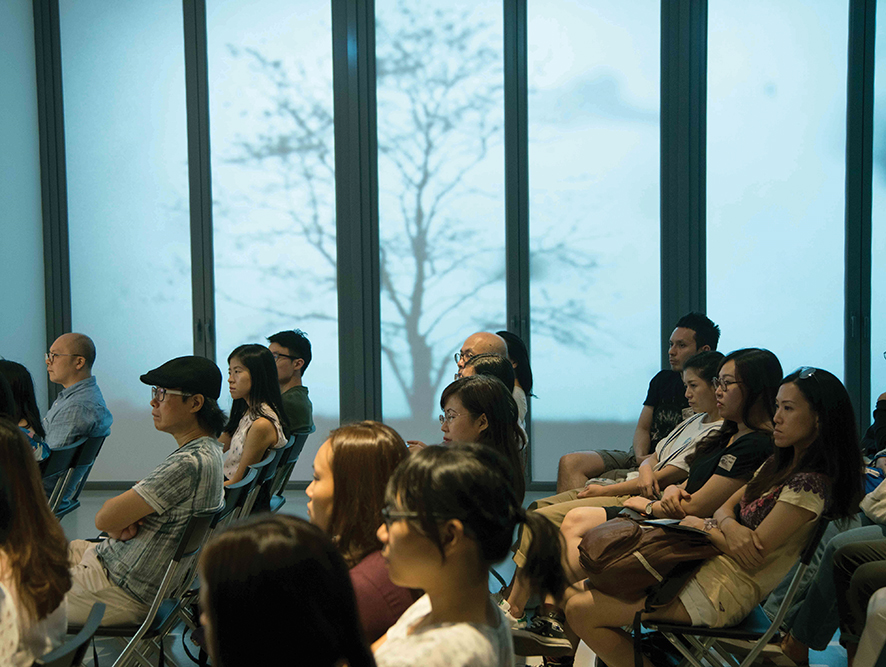 Artist Tsang Kin Wah represented Hong Kong in last year’s Venice Biennale and has brought home a continuation of his quest for life’s ultimate meaning at the M+ Pavilion. This time the exhibition programme also includes the Misguided Tours, in which three curators who have previously worked with Tsang shared their alternative interpretations of the work.

After The Infinite Nothing in Venice, nothing in Hong Kong takes the artist’s attempt to realise endlessness and perpetuity to another level. This time he wants to visualise and present nothingness: a personal visualisation of being under a nihilistic spell, and a manifestation of responses to realising the futility of life. It isn’t a straightforward or light-hearted work to digest.

The Misguided Tours are an effort to counter the idea that there is an official way to understand art. Everyone has a blind spot; other people’s perspectives can dispel preconceptions and expand the understanding of a work. Tsang, a fan of Nietzsche, who famously said that ‘There are no facts, only interpretations’, would agree.

nothing is the first show at the M+ Pavilion, the first completed permanent venue at the West Kowloon Cultural District. In his Misguided Tour, curator David Chan asked what it means to present nothing in a museum, an institution that is supposed to generate knowledge and produce meaning. Chan worked with Tsang on his Ecce Homo Trilogy I in 2012, a time when Tsang was beginning to place more emphasis on the spatial arrangement of his works. For both Ecce Homo Trilogy I and nothing, the artist intended
visitors to take a specific route. The nothing journey begins by climbing a staircase onto
a deck with walls of mirrors on four sides. Following a trail of his text installations, visitors move from daylight to the darkened gallery for several video projections, and eventually exit by re-entering the deck.

Chan further expanded on the notion of nothingness in his Misguided Tour, connecting a personal reading with a social and political one. It is “nothing” with a strike-through, a negation to counteract the paradoxical need to signify the notion of nothingness with something. It asks how this concept of double negation can illuminate our current socio-political climate. He raises the interesting proposition that nothingness represents a level of equality, an idea with similarities to the Buddhist notion of sunyata.

The tree at the centre of the deck carries religious symbolism, referring to the Christian Tree of Knowledge and the Buddhist Bodhi Tree. Both are instruments of knowing, but the consequences of that knowledge are vastly different: Adam and Eve were forever banished from Garden of Eden after eating the forbidden fruit from the Tree of Knowledge, leading to the Fall of Man;

Siddhartha Gautama attained enlightenment under the Bodhi Tree and became the Buddha. Lifelong exile as punishment or an elevated, renewed sense of life: perhaps only a thin line divides them.

Tsang puts a trail of text around the tree on a circular deck, which leads viewers on several loops before they enter the gallery. In her Misguided Tour, curator and artist Kwok Ying traced the origin of Tsang’s fascination with words and meanings by looking back from 2008, when they worked together in the UK on Tsang’s solo show at the Centre for Chinese Contemporary Art in Manchester, to the years in the late 1990s when they were classmates at The Chinese University of Hong Kong.

From his well-known wallpaper series, where swear words form beautiful William Morris-inspired floral patterns, to his early woodblock prints of made-up Chinese characters that look like swear words, Tsang has been consistently concerned with fluidity in truth and interpretation, and with words and meanings. His works often play on the discrepancy between scientific and emotional interpretations of signs and words.

Kwok also highlighted the repressed emotions and anger that are often present in Tsang’s works. There are two kinds of swear words, she says: one kind are simply adjectives, while the other are used to express intense emotions. For a polite man like Tsang, profanity has the latter function. He might have dropped that profanity in his recent works; he is still channelling volatile emotions, however, in a subtler but more powerful form.

In his Misguided Tour, art critic and writer John Batten focused on the audio element of nothing as a way to zoom in onto the more emotional aspects of the work. Batten worked with Tsang when the latter was just starting to get attention; the artist put on a solo show at Batten’s gallery in 2005, text installation White Cube, which covered the entire gallery with provocative words dismissing the commercial nature of the art world. It was highly ironic, “but the people did not get it: they just didn’t”, says Batten. Getting his message across, however, was never Tsang’s intention. Piecing together elements that speak to him personally – from Stanley Kubrick to Béla Tarr, Beethoven to Kurt Cobain, Shakespeare to Emil Cioran – nothing is as personal as a homemade mixtape.

As a response to nothing Batten created a personal selection of songs, ranging from Nina Simone to The Tiger Lillies, that expand on the ideas of loss, love, relationships and personal struggles, intricately tying them into the angst and turmoil submerged in nothing. This sentiment is most apparent in the black-box room, created to cage in all the chaotic and unnerving emotions that are too much to be confronted. At first the room doesn’t seem to have an entrance. The entrance faces the wall of the gallery. Projected onto the wall is part of the video from within the room, in same dimensions as the doorway, drawing visitors closer to the bombastic sound within the room.

Batten tied the idea of unspoken trauma and pain into that of gender. Men are sometimes considered more prone to violence or depression than women because of their difficulty
expressing their emotions. nothing is a masculine work, constructed with steel columns, hard-edged Arial fonts and monotone solemnity, but at the same time an undercurrent of agitation and sorrow occasionally leaks out, inviting the viewer to examine and dig deeper.

Like our lives, oscillating between the important and the frivolous, the private and the
monumental, nothing is both intimately personal and larger than life. The co-existence of these extremes in nothing allows it to speak directly to each individual. It is a mirror that morphs and reflects your state of being every time you approach it. There is no absolute way of understanding it, only interpretations.