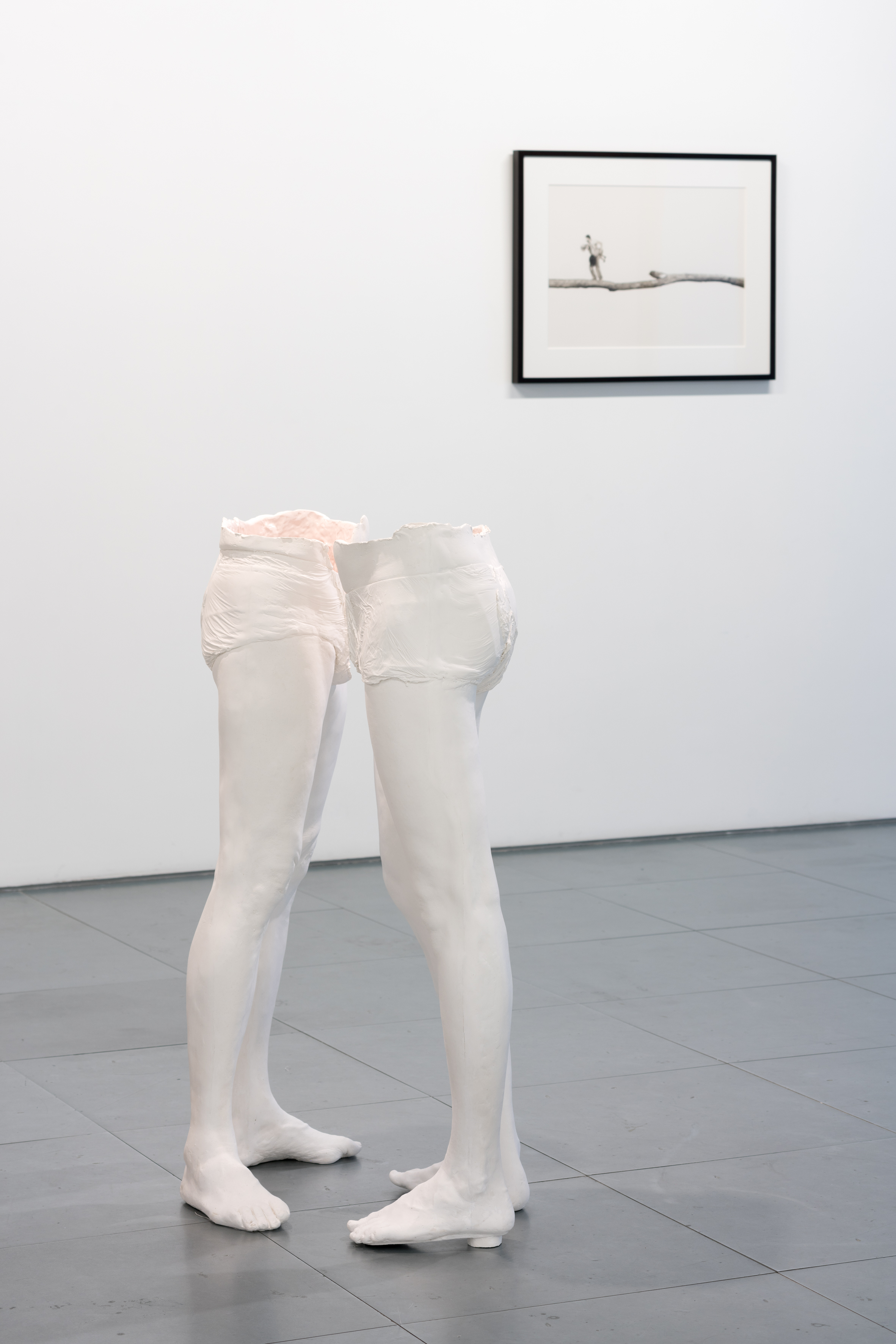 The setting for this exhibition, of 10 ink and watercolour drawings and three sculptures by French artist Fabien Mérelle, is very sober, and there is enough empty space between each piece to get the imagination working. The drawings are meticulous, while the pale pink sculptures made from acrylic resin look pretty rough. Yet an unlikely balance and an interesting dialogue lend harmony to the whole gallery, dominated by a feeling of floating and emptiness.

Étreindre, the title of the exhibition, means to embrace warmly. It also means to hold someone so tightly that there is precisely no space in between. The title comes from a drawing, at the end of the exhibition, of two almost nude men holding each other tightly. They are actually the models for the three sculptures, which represent them in a fragmented way, scattered all over the space: the legs to begin with, then the torsos and finally the heads, all life-size empty moulds. There is a strong contrast between these pieces, abandoned like ruins, and the realistic embrace of the drawing: they are only traces or dreams of that embrace.

The sculptures are the remains of a real embrace: the artist and his father posed for them. According to Mérelle, it was a painful, tiring performance. The pressure of time and the threat of death weighed on this hug between a man who is still a father but who is now marching towards the end of his life, and a son who has become a father himself. The artist wished to capture this fragile, key instant when life switches and roles swap. The fragmentation comes from his desire to express the impossibility of two bodies being linked forever: a dream, then, but its presence-absence occupies the whole space and produces a sensation of hollowness and transience.

Drawing, with its unimpeded access to the imagination and its fragility, is the perfect vehicle for uncertainty and perpetual suspension. In this way Mérelle’s drawings respond perfectly to the sculptures: open, and looking like works in progress, they stand like promises on the edge of reality and time.

Mérelle is above all a draughtsman: from pencil to ink pen, he has been drawing since an early age. He conceives the paper as the stage of a theatre open to all sorts of possibilities. Starting from accurate, truthful details, and thanks to the precision
afforded by ink, he gives birth to fantastical situations between realism and fiction: a man flying, following a bird in the sky, or seated with a little girl on the back of a crocodile; a woman welcoming a naked baby under a wooden hut; a man climbing a straight, thin tree full of tiny branches.

Mérelle’s drawings convey the enchantment and fears of childlike universes, and have the power of embracing reality as a whole, including its mythological, hidden, imaginative parts. An important place is left for blank spaces to create a vacuum around the characters, and for the mind to be able to float freely between the lines.

During a long residency in China, he discovered the void as an essential part of Chinese culture, and had to face the physical void of the place where he was working, an empty building that brought back all his childish nightmares. The artist constantly stages his own anxieties and fantasies, and creates narratives from his own life, transforming them into universal material. This time he expresses the urgency of protecting the ones he loves in a world overwhelmed with uncertainties and growing hostility. To embrace, then, could mean to hold tightly onto what we have, by accepting our own limits while exploring the infinite universe of the imaginary.

The marvellous drawings Homme volant 1 and 2 (meaning ‘flying man’) resemble sketches of costumes for a surreal play. They embody all people’s attempts to transform
themselves into flying creatures, and thus to escape the human condition. Yet they are only costumes, and we know it: this is only a dream. The beauty of these drawings comes from this touch of humility and simplicity.