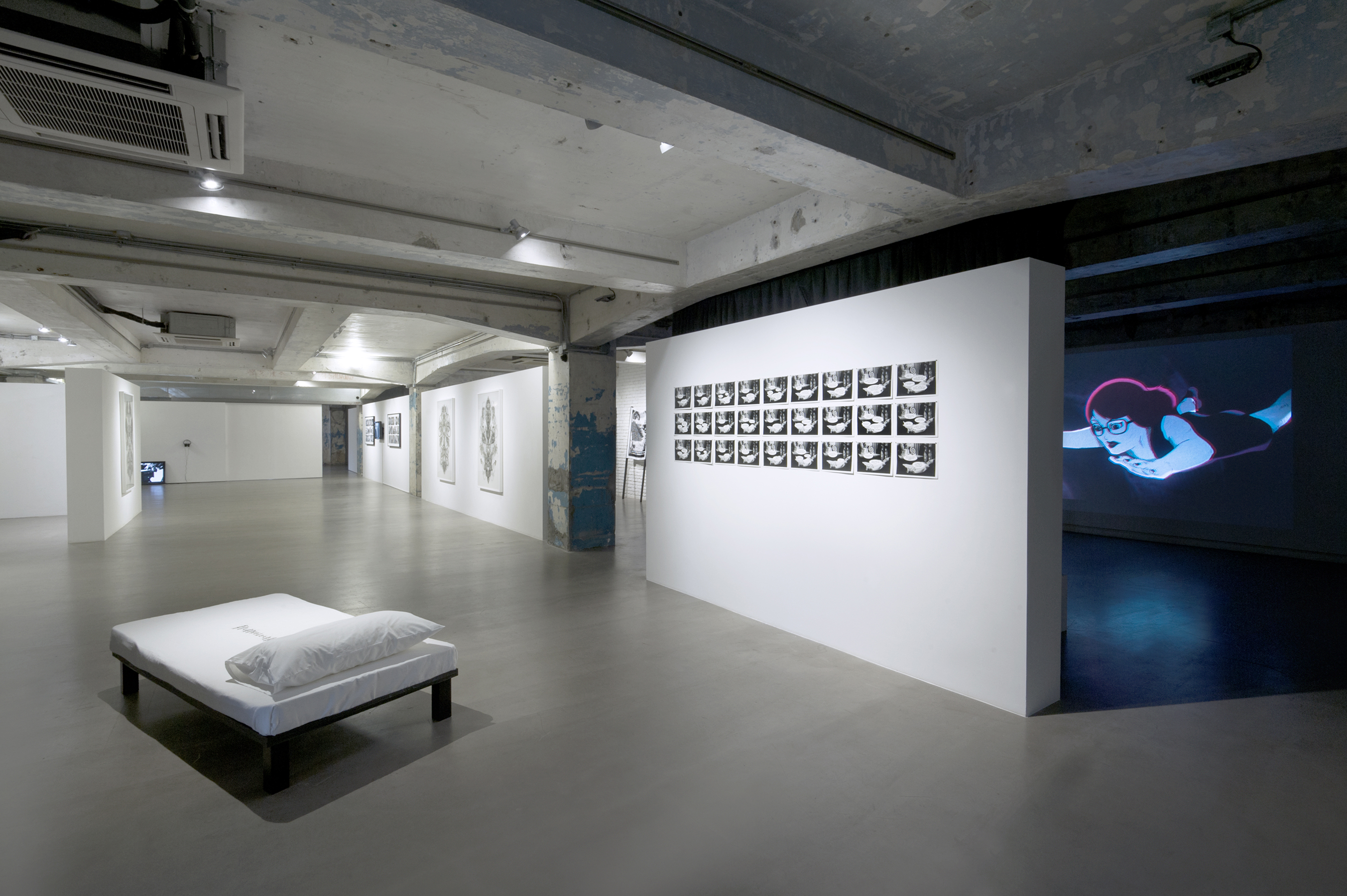 Among the first people to experiment with electronic synthesisers in the early 1970s were British band Curved Air. Their music captured the heady atmosphere of the era, while the cover of their 1972 album Phantasmagoria, drawn by prominent illustrator John Gorham, featured a long, curly title running from edge to edge, with a hooded figure in the background smoking a hookah.

The album’s title was inspired by Lewis Carroll’s poem Phantasmagoria, meaning a fantastic sequence of haphazardly associative imagery. Carroll’s poem – the longest he ever wrote – is a comical, nonsensical conversation between a ghost and a Mr Tibbett. The ghost arrives intending to take up residence in Mr Tibbett’s home, but after a series of conversations and explanations of why he is there, eventually realises that he is at the wrong address; he should be at a Mr Tibb’s home. The poem reflects the Victorian era’s interest in the supernatural, the world of psychics and mediums who employed showmanship and what novelist Hilary Mantel recently described as “canny psychology”. The album’s title track linked Carroll’s story to the psychedelic culture of the early 1970s, with lyrics that allude to hallucinatory drug experiences.

Angela Su’s exhibition continues these interests, particularly the excellent title video, the faux-biographical documentary The Afterlife of Rosy Leavers, about Rosy Leavers and her influences. Su doesn’t extol 19th-century curiosity about the afterlife or the drug-altered consciousness of the 1970s, but questions our perception of reality using her own research on mental illness and social control, and recurring visual motifs from her work. Su takes centre stage for a “self-reflexive journey” as an animated alter ego named Rosy Leavers. In another video, The Interview, a disorientated version of Angela Su – or her doppelgänger – is interviewed on television.

Su uses a variety of media: video, drawing, appropriated photography and installation – notably a bed, possibly a counsellor’s or patient’s, with an embroidered sheet of text using hair and a row of protest placards. Su is best known for her pseudo-anatomical drawings on paper, featuring imagery often built in layers using translucent drafting paper. In this exhibition, however, her drawings are used sparingly but specifically complement two visual motifs seen throughout the exhibition: the spiral and the double. Her symmetrical Rorschach Test series of drawings are intricate floral patterns but the viewer will also use a “deeply intuitive side of the human psyche” to see patterned sex organs.

These drawings expand on the hypnotic video Rosy has a spinning twin, which begins with autistic children playfully spinning in a room, but morphs into permutations of spiralling and then symmetrical Rorschach patterning. Meanwhile the video’s voiceover tells us that “Rosy has a spinning twin”, and continues in a rambling series of word slippages, including “Rosy has seen her kin”, “Rosy has split her chin” and “Rosy has split her grin”, the verbal transformation mirroring the visual one.

The video complements twin/pin/spin and split/snip/slit, two inkjet prints of found images of doubling from nature, such as identical twins and symmetrical butterfly wings. The doubling images are shown alongside images of spiral patterns, most notably satellite images of typhoons. In a brilliant extension of these visual motifs, the double appears in split/snip/slit as people with a physical deformity, for example the symmetry of a double amputee exposing his identical stumps. The spiral is represented gently by images of plant dissections under a microscope, and violently by various bloodied cuts and incisions into the skin.

The latter relates to Su’s two Rosy Nobody drawings that depict a single limb, respectively an arm and a leg, attached to a spindly array of tissue and arteries. Removing a single limb destroys the body’s symmetry and begs the artist’s question: what is an arm or leg without a body? It prompts an awareness of physicality, disability and the consciousness of adaptability, acceptance or failure.

Throughout the exhibition, Su emphasises her scepticism about medical treatments for mental illness – the psychiatrist’s couch, medicine, the induction of hallucinatory states and theories of reality. In Please tell me what’s been bothering you, a sequence of 27 digital prints separated into individual conversation panels, Su constructs a therapy session between herself and a first-generation artificial-intelligence psychotherapist from the 1960s. The computer program is basic and the conversation quickly melts into banal questions and stock answers; the computer eventually merely repeats programmed keywords and parrots the patient’s answers, mirroring the patient to effectively become her doppelgänger.

A Reminder to Myself is a set of eight protest banners emanating from Su’s research into 1970s German radical patients’ reform group the Socialist Patients’ Collective (SPK). In a wake-up call to the medical establishment, the SPK wanted to “turn illness into a weapon” to demand change to medical practices and systems – particularly the treatment of patients in psychiatric institutions. The impetus for the SPK’s actions was the arbitrarily labelling as sick of arrested political radicals at the time. The SPK intended to challenge the very heart of the state’s institutions of social control.

This outstanding exhibition dealt with both big, universal themes and smaller, personal issues with visual alacrity and modest strength. The video anime image of Angela Su/Rosy Leavers flying through the air, in a pose reminiscent of Astro Boy, should be a totem for strong female Hong Kong artists for years to come.