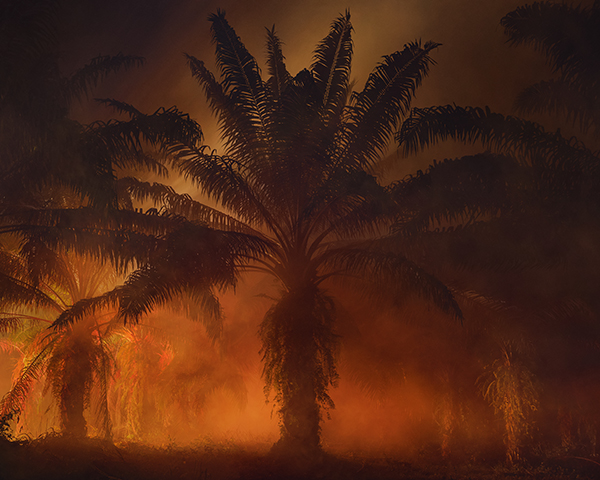 An Invitation To Disappear

Shot in Southeast Asia, Julian Charrière’s new film An Invitation to Disappear records a psychosocial transcendent rave set in the fields of a monoculture palm oil plantation. A linear camera shot through nauseatingly infinite rows of trees is underpinned by the mesmerizing pulse of natural sounds and techno beats, developed together with the British DJ and producer Inland. The film also marks the first outcome of the artist’s collaboration with philosopher Dehlia Hannah, responding to the 200th anniversary of a volcanic eruption in Indonesia that plunged the world into darkness and weather extremes—a climate cooling crisis remembered in Europe as the “year without a summer.” The delirium of the rave feels increasingly alienating within the man-made grid of the plantation, culminating in feelings of unease competing with the temptation of intrigue. Fog, flashing strobes, and overwhelming sounds turn the palm grove into a melancholic party zone in which the lack of people only exacerbates the dystopian vibe.