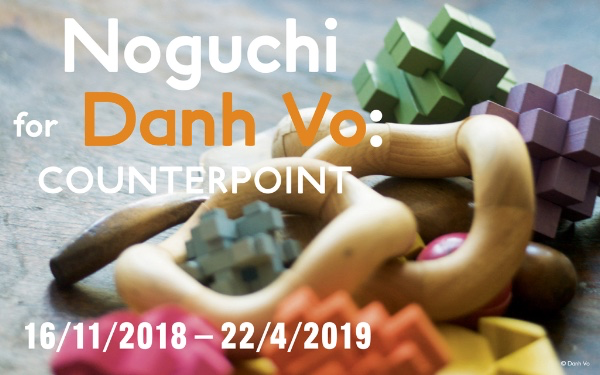 M+, Hong Kong’s new museum of 20th- and 21st-century visual culture in the West Kowloon Cultural District, presents Noguchi for Danh Vo: Counterpoint, to be held at the M+ Pavilion from November 16, 2018 to April 22, 2019. This exhibition is a dialogue between two artists: Japanese American artist Isamu Noguchi (1904–1988), who is a central figure in the history of modern art, design, and landscape architecture, and Vietnamese Danish artist Danh Vo (born 1975), an original voice in contemporary art practice.

The exhibition articulates this conversation through a range of works by Noguchi that spans almost five decades, including drawings, industrial design objects, and sculptures in stone, metal, and other materials. Vo’s contribution to the exhibition consists not only of select examples of his practice produced between 2010 and 2018, but also of building a bridge between two institutions and two cities—M+ in Hong Kong and The Noguchi Museum in New York. The exhibition is structured as a counterpoint, a relationship between two separate melodies that interweave and complement each other while maintaining their respective independence.

Works by Noguchi and Vo are presented in the gallery space of the M+ Pavilion as well as outside, in the Art Park of the West Kowloon Cultural District. The installation in the gallery is inspired by the scholar’s pavilion and garden—a leitmotif in traditional Chinese ink painting—imagining Vo as the resident scholar. The focal point inside the gallery is Vo’s Untitled (Structure for Akari PL2), a modified design of a traditional architectural form from Guizhou Province, in southwestern China. This small pavilion is adorned with PL2 model Akari lamps designed by Noguchi, forming an illuminated seating area, and it is surrounded by nearly three dozen selections from Noguchi’s practice produced between the 1920s and the 1980s. Works such as Cloud Mountain (1982–1983), made from galvanised steel; the collapsible, puzzle-like Strange Bird (1945, cast 1971); and the amorphous, allusive, alabaster Leda (1942) demonstrate Noguchi’s artistic versatility through diverse forms and materials.

Outside the M+ Pavilion, two modified shipping containers hold Vo’s carefully designed installations of his work, including a copper piece of We the People (detail) (2011–2016)—a reproduction at a one-to-one scale of the Statue of Liberty separated into more than three hundred fragments—a violently dismembered ancient marble sculpture, a gilded cardboard box, and a calligraphic rendering of the Cinderella story as told by the Grimm brothers. Vo’s presence outside the gallery is echoed by the Noguchi-designed Play Sculpture, installed nearby. This sculpture is one of the pieces that Noguchi developed for his utopian playscapes.

About The Noguchi Museum
Founded in 1985 by Isamu Noguchi (1904–1988), one of the leading sculptors and designers of the 20th century, The Noguchi Museum was the first museum in America to be established by an artist to show his own work. Comprising ten galleries in a converted factory building, and a sculpture garden, the Museum, widely viewed as among the artist’s greatest achievements, is an international hub for Noguchi research and appreciation. In addition to housing the artist’s Archive and managing the ongoing Isamu Noguchi Catalogue Raisonné, the Museum exhibits the full range of the artist’s work. Frequently changing installations from the permanent collection and special exhibitions offer a complex view of Noguchi’s art and illuminate his enduring influence as a category-defying, multicultural, cross-disciplinary innovator.