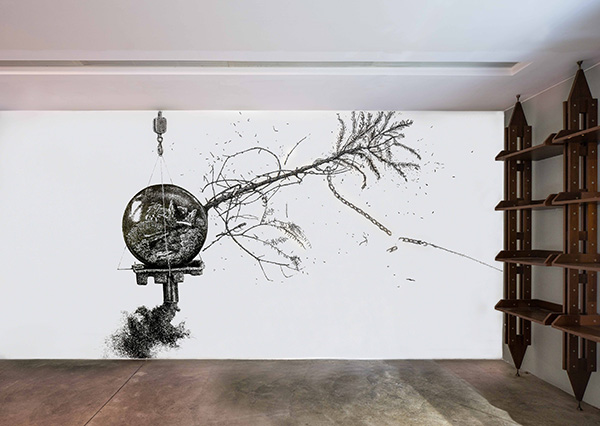 We Travel in Our Minds was the latest guest-curated exhibition that Duddell’s presented for its third consecutive autumn programme, with the aim of showcasing unique, rarely seen items from private Hong Kong collections. It highlighted unusual pieces from three collections in the Duddell’s library, replacing the books on its shelves as objects conveying knowledge, culture and history. They were complemented by a series of meticulously executed black-and-white wall drawings by Boston-based artist Ethan Murrow. Depicting imagined worlds of the whimsical and the absurd, they formed a fantastical backdrop for the objects. The result was a melange of contrasting artforms that balanced the classical with the modern, creating an interesting, serendipitous conversation between the two.

Most of the antiques were from the Claire & Francis Heritage Lane Collection, with the oldest, a white pottery bird-shaped cup, dating to the Han dynasty (202BC-220AD). There were other animal-themed vessels in the form of a parrot-shaped stoneware cup from the Northernand Southern dynasties (420-589AD) and two small Yue ware celadon ewers in the shape of tigers from the Jin dynasty (265-420AD).

Other outlandish sculptures included two small stoneware figures of mermen from the Song dynasty (960-1279AD), with human heads on the bodies of fish; they could even be described as cute. Another anthropormorphic figure is a striking pottery horse-headed court official from the Tang dynasty (618-907AD), standing majestically and solenmly tall. From the same period there was also a two-headed turtle inkstone from the Wui Po Kok Collection, and a sancai unicorn from the Songyin Ge Collection. All the objects attest to the playful imagination and creativity of Chinese artisans from bygone eras, who incorporated peculiar mythological elements into their commissions.

The same spirit continues through Ethan Murrow’s wall drawings. Pastoral Monologue depicts a gigantic orb, not unlike a snow globe, being transported on a moving platform with a large exhaust pipe beneath spluttering black smoke. It is simultaneously being hoisted up by a hook. A tree has erupted from the interior landscape of the globe, breaking a metal chain tied to its trunk.

Aria Maker depicts a wooden stringed instrument with mechanical parts hanging from above, below which dangles an iron wheel connected to a large Chinese bronze ding tripod. This is in turn linked to a birdcage hanging on strings tied to two fingers of a marionette’s hand. Nothing is what it seems.

We Travel in Our Minds was, as the title suggests, an exhibition that encouraged its audience to venture out and explore a world of fantasy and the unknown. It indulged in ideas of the otherworldly, flirting with theatre, puppetry, music, mechanics and, of course, travel. By combining historical objects with modern wall drawings, it showed how creativity and
imagination traverse the boundaries of time, across cultures and through different media; that art is open to interpretation and, more importantly, can be fun.