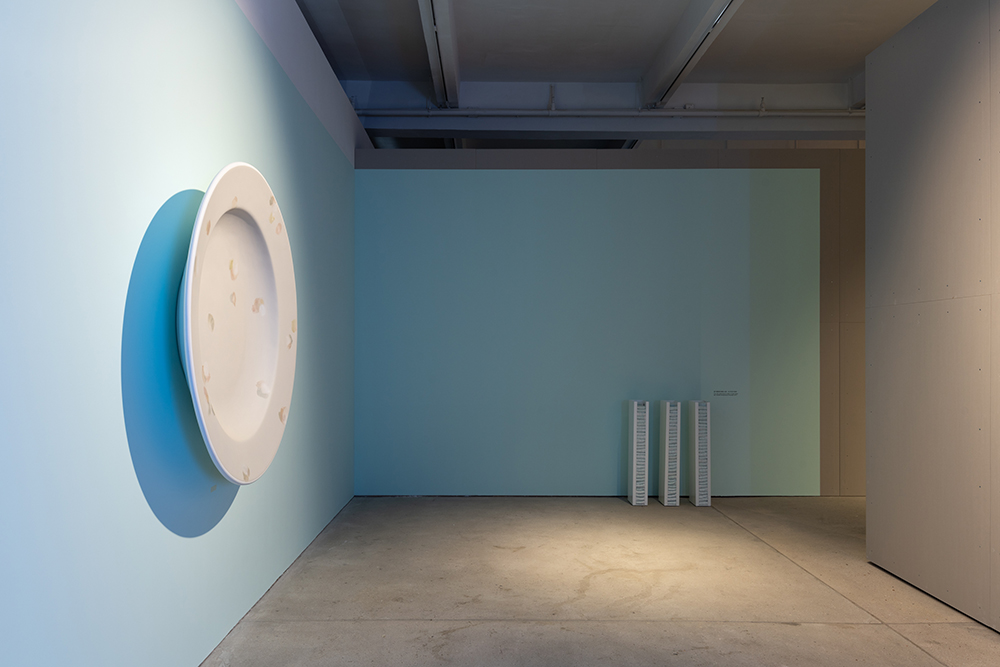 In 2003, the SARS outbreak led to a shutdown of Hong Kong. The virus infected 1,755 people in the city, killing 299. Fear of the epidemic led many, mainly expats, to flee. Those who didn’t leave avoided public spaces. A housing estate was put under quarantine, public transport and public areas were deserted, and schools were closed. At the height of the SARS crisis, iconic Hong Kong actor and singer Leslie Cheung jumped to his death from Central’s Mandarin Oriental hotel, adding to the trauma, gloom and anxiety that were already consuming the city. The crisis impacted Hong Kong physically, psychologically and economically, and like epidemics before, it shaped the city and its habits, policies and people.

Contagious Cities: Faraway Too Close at Tai Kwun Contemporary, a group show with works by 10 local and international artists, attempts to explore the psychological and emotional dimensions of disease and contagion. Presented by the Wellcome Trust, a biomedical institution that has invested
billions in fighting viruses, the exhibition is two-pronged, also featuring a heritage component put together by Tai Kwun’s Heritage Department that addresses the historical context of the 1894 bubonic plague outbreak in Hong Kong. “Taking SARS as a point of reference, artists in this exhibition were invited to research various issues related to Hong Kong’s history of epidemics and social practices,” writes curator Ying Kwok in the exhibition press release; Kwok also oversaw Hong Kong’s participation in the 2017 Venice Biennale. This intention, however, is not always conveyed in this confused, confusing exhibition.

On entering the exhibition space, visitors are greeted by a large, square, white neon sign bearing a triangular symbol featuring the exhibition title, reminiscent of biohazard signs. Almost immediately one encounters an oversized plate by Taiwanese artist Chou Yu-Chen (Refresh, Sacrifice, New Hygiene, Home, Washing, Chou Yu-Cheng, Acrylic, Rag, Scouring Pad, Plate, Image, Album #11, 2018) displayed on a wall, and a stack of sanitised, lemon-scented wet hand towels printed with the words of their title, Wiping, Perception, Touching, Infection, Disinfection, Education, New Habit (2019); visitors are encouraged to take them if the temperature is over 24 degrees, which facilitates bacterial growth. The scented towels tap into our sense of smell, triggering the memory associations of disinfectant, particularly prevalent in office and apartment buildings during and after SARS. They are intended to reaffirm the habit of hand sanitisation that became the norm during SARS, a social practice that still prevails in the city today. It also gives the impression of stepping into a Universal Studios set of a contagion movie.

Behind the main entrance wall stretches Train Compartment (2019), a four-by-nine-metre black-ink mural by Hong Kong artist Oscar Chan Yik Long. The work, which could have done with more space in which to view it, incorporates iconography from horror films and manga. Snakes, skulls, eyeballs and demonic figures multiply across the surface in a petri dish overflowing with nightmares and paranoia, symbols conveying the fear of a lurking, invisible, ever-present threat of contagion and disease. An ominous figure of a plague doctor, wearing a beak-like mask associated with bubonic plague treatment in 17th- and 18th-century Europe, hovers in the foreground, creating an underlying tone of anxiety and fear.

A series of paintings by Firenze Lai hang in a cluster on a separate wall. Lai’s work crops up with tiresome frequency, a total of nine times, like punctuation marks throughout the exhibition. The artist conveys fear, angst and sickness in her works, some more successfully than others in the context of this exhibition. There is an elegant oil on paper of a figure in a white hospital gown against a red background (Red Curtain, 2019) and a grey painted figure slumped over a table (Bended World, 2018). Others are more conventional figurative works that seem out of place, like Threshold (2018), a graphite-on-paper work depicting a figure standing between two classical columns; or Titled Circle (2018), a large, colourful painting on canvas (mistakenly labelled as oil on paper) depicting a circle of dancers, which references Matisse’s Dance (1910).

If the inclusion of Firenze Lai and Oscar Chan’s works in the context of an exhibition on epidemics, SARS and the plague of 1894 seems familiar, that is because it’s been done before. In 2013 Para Site Art Space staged A Journal of the Plague Year. Fear, Ghosts, Rebels. SARS, Leslie and the Hong Kong Story, curated by Cosmin Costinas and Inti Guerrero, which explored the
impact of plague and SARS on the city. Taking 2003, a year marked by SARS, fear and chaos – as well as the suicide of Leslie Cheung – as a launching point, the exhibition traversed Hong Kong’s colonial past from the plague of 1894 to its present, while also delving into the more complex political and identity politics triggered by the SARS outbreak. Contagious Cities treads on similar terrain without really expanding the discourse, and only scratches the surface of its own curatorial ambition.

In a large exhibition room stands Apocalypse (2016) by Wang Shishun, a circle of eight large rocks on a round pedestal, arranged like a Stonehenge-inspired Chinese rock garden. The label for the work informs the viewer that the stones are from a selection of more than 300 gathered from around the world, and that the artist sees stones as “lives” originating from different places, with their own stories. The viewer is left trying to perform mental acrobatics to try and fit the work into a curatorial context.

The show also includes several beautiful, intricate drawings by Angela Su – the artist’s signature dissected anatomical works fusing human organs with machines – which serve the curatorial concept only insofar as they relate to the medical and anatomical. Su, a former microbiologist, undertook a six-month residency at the Hong Kong Museum of Medical Sciences to complete the film project. The museum’s site in Tai Ping Shan was once reserved for Chinese tenement housing under British colonial rule, and in 1894 bubonic plague broke out there, resulting in the demolition of the housing. A few other ink drawings depicting cell-like organisms fringed with curlicues of tentacles accompany the video installation. With no labels or information about these works, they seem to be there merely to furnish the video installation, like art works in a TV room. Su’s three-screen video installation Cosmic Call (2018) is the show’s strongest work, blending fact and fiction
to provide an alternative understanding of epidemic outbreaks with dark, tongue-in-cheek humour. On a large screen a 12-minute film fuses documentary with B-grade horror films, conflating the appearance of comets across the Hong Kong skies with the emergence of epidemics. Taking inspiration from traditional Chinese medicine, cosmology and philosophy, it explores the tension between western and eastern medicine, referencing the dual culture of Hong Kong, and touches on political tensions that mounted during the SARS outbreak.

Rooms towards the end of the exhibition and outside of the main exhibition space display historical documents on the 1894 bubonic plague epidemic and other contagious disease outbreaks in Hong Kong, serving as an educational backdrop to the art component of the exhibition, and giving context to the show. The heritage component, then, fulfils its objective, but generally Contagious Cities is a patchy exhibition that lacks cohesion or consistency, a puzzle of ill-fitting pieces, as if the curator struggled to fulfil her curatorial vision. A confused, anaemic show, it feels like a theme park for the flâneur of epidemics and the macabre.