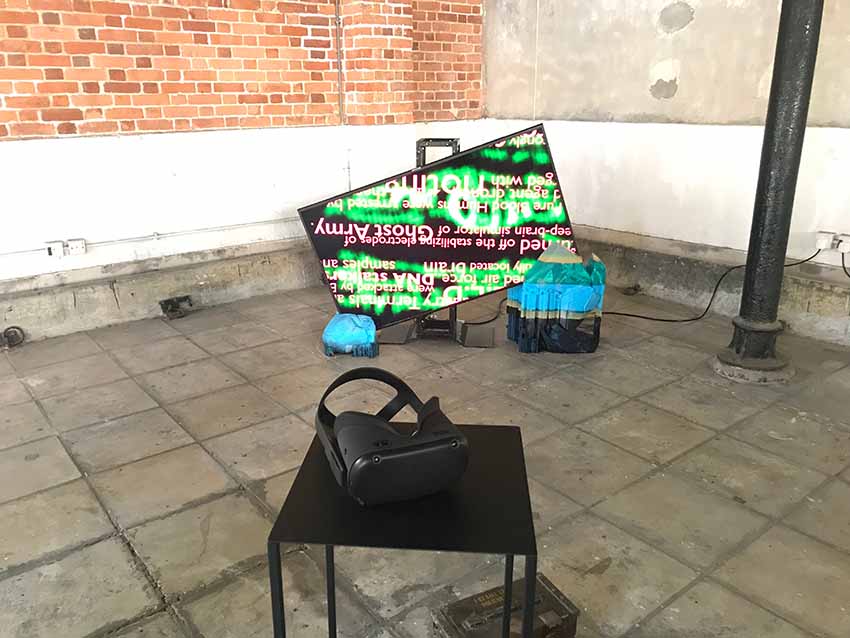 In Japanese garden design, borrowed scenery is the practice of incorporating the surrounding landscape into the composition of your garden.

It’s unclear what Borrowed Scenery, a group exhibition of six Hong Kong-based artists and artist groups at Cattle Depot Artist Village, is borrowing from, and what scenery it might conjure. According to co-curators André Chan and Jing Chi-yin Chong, the show isn’t so much a direct reflection of the Hong Kong protests as a general reflection of what’s been happening in the world. Yet it’s difficult not to see the art through the eyes of the local sociopolitical movement.

Ko Sin Tung’s Guardian (2019) shows someone gently weaving together a barbed wire fence in three videos. The title is ironic, for while a fence is meant to protect, Ko’s video evokes images of the menacing rows of barbed wire installed around Kwun Tong Police Station ahead of a march in the neighbourhood last August. Opposite this work, Sarah Lai’s “graffiti columns” seem to be a direct reference to the city’s protest graffiti.

Ocean Leung’s Encounters (Never Mind the Cloying Sentiments) (2019), comprising steel tables that are stacked atop one another, and four videos – one of which displays a ferociously burning fire – is reminiscent of the barricades protesters built as a tactic to delay police clearing actions, but also the “bridges” they constructed on Harcourt Road during the early days of the protests and, before that, the 2014 Occupy movement. Shreds of our current cityscape are everywhere. As the curators led journalists around the installation at an opening event for the show, someone asked, “Can I climb this?”. That was met with a hesitant “Technically, yes. But I don’t believe it’s meant for that.” It was reminiscent of footage of protesters hurriedly climbing over makeshift bridges to either block roads or escape police attacks during marches. If art is ultimately linked to play and can act as a “play-generating yeast”, as philosopher Henri Lefebvre suggested in Critique of Everyday Life (1947), what happens if that sense of play is disrupted by collective trauma?

Lai Lon Hin’s Black Dream (2019) pieces together more than 20 snapshots taken with a phone in a video loop – a wide open mouth, traffic lights that have been tampered with, a doll’s head. While some images, like the traffic lights, evoke the protests, others are shots of day-to-day city life – and yet, in part due to the speed with which one image flips to the next, there appears to be little differentiation between the two groups of photos, with one appearing to meld into the other. In normal times, art has the power to transport our senses beyond the world we’re living in. But in tumultuous times like this, it appears that the surrealism of the everyday overwhelms any speculative power that art is supposed to offer.

C&G Artpartment’s On the Fire 2018 and Our Next Generation and Us (both 2018) are two of the few works that don’t directly evoke the protests, and are the strongest of the bunch. The latter is particularly succinct. In the video, founders Gum Cheng and Clara Cheung learn Putonghua from their daughter through a pop quiz, exposing the fact that Cantonese, the native tongue of many born and bred Hongkongers, always appears to take second place – to English during British colonial rule and then to Putonghua after the 1997 handover. The work, and the title of the exhibition, recall Richard Hughes’ 1968 book Borrowed Place, Borrowed Time. As inhabitants of a colony, Hughes argued in his book, Hongkongers had always been living in a borrowed place and time, and it is this mentality, with no regrets for the past or worries for the future, that allowed an entrepreneurial spirit to flourish. It should follow that Hong Kong, upon its return to China in 1997, would no longer be living in a borrowed time and place. But that didn’t happen; while Hong Kong might not be living in a borrowed place, it is still living on borrowed time, as shown by how differently many Hongkongers view themselves from their mainland Chinese counterparts.

Vvzela Kook’s Confidential Record: Execution (2019) is a VR work whose message, “Civilisation is sterilisation”, can be applied to almost any civilisation, but particularly evokes the Uyghur Muslims who have been sent to re-education camps in mainland China.

The show never really answers the question: what is Borrowed Scenery borrowing from? The ongoing protests in Hong Kong? The viewer’s emotions during this tumultuous time? It could be a timely show, but some of the works hew too closely to reality. That dilemma appears to take literal form in Kong Chun-hei’s United As An Obstacle, a metal structure that blends seamlessly with the feeding troughs at the Cattle Depot. If art’s power lies in its ability to say “What if?”, what can it do when reality is becoming stranger than fiction? While Borrowed Scenery raises more questions than answers, it does point out one thing: that our way of seeing and experiencing art and the world has already undergone major shifts at a time when ideological and physical clashes appear to engulf all aspects of life.