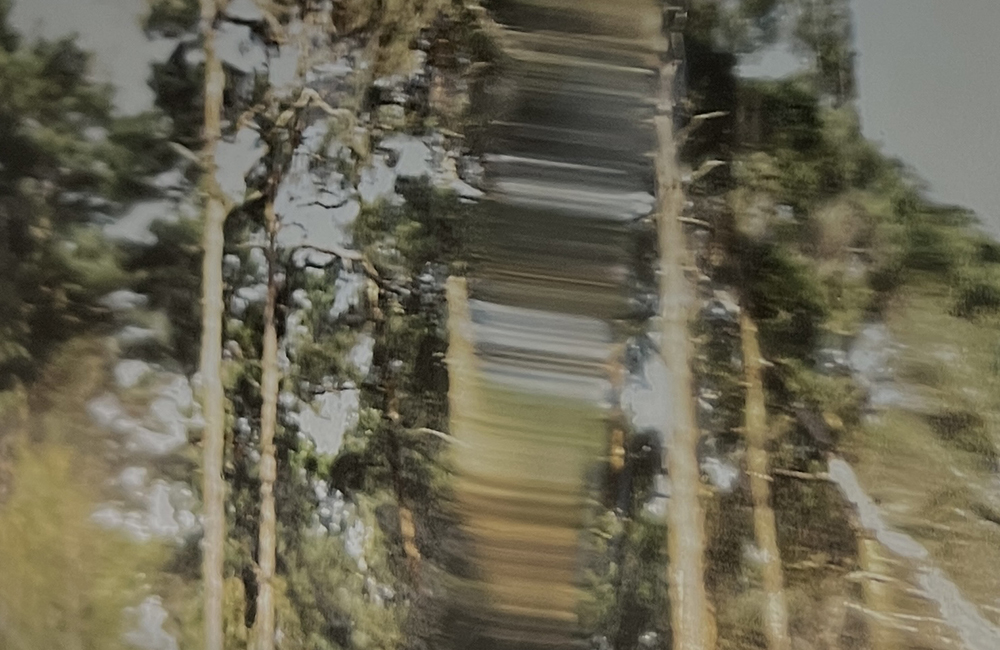 In Wing Sze Lam’s stars in the woods (2016) and stars in the water (2018), a pair of moving-image works, darkness descends gradually over dense foliage and docked boats until the only sources of illumination are streetlamps and passing vehicles. The camera never moves in either sequence, registering the day’s slow surrender to shadow. Screened near the entrance of 1999 Art Space on two wall-mounted smartphones, the works are an apt introduction to Lam and Heiwa Wong’s Dailyscape, a dual show about documentation and urban memory.

Wong’s photographs likewise carry a sense of duration despite their static medium, evoking long evenings spent under an artificial glow. Images of a laptop screen reflected in a bedroom window and bands of light cutting into a dark footbridge (both from the series stars in the city, 2022) capture the electric quiet of the nighttime.

Lam finds a hidden language of luminescence in “Turn on the light when you are back” (2017–18), comprising clips of streetlamps played on a small analogue TV. The lens focuses on moments of dysfunction, such as a normal bulb next to its extinguished twin, and a wall-mounted orb that flickers intermittently before blazing back to life. Lam is a patient interlocutor, waiting to decode the lamps’ capricious blinks.

Both artists view their surroundings with a subdued wonder, bringing attention to the fleeting and exceptional moments that punctuate quotidian life. Lam’s “Hello, goodbye.” (2018) depicts the brief synchrony of two MTR trains rushing through a dark tunnel before diverging along their separate tracks. The camera lingers on one of the trains as it hurtles into the night. Meanwhile, in the video projection ’s Gaze (2017), Wong documents an unusually foggy day in Cologne that happened to coincide with the 2017 German federal election. The scenes have an eerie, deliberate anonymity – an empty street seen from behind a railing; an indistinct figure trudging through a park.

An intriguing point of connection between Wong’s and Lam’s works is the significance of public transport as a mode of collective experience. For the three-channel installation Roadshow II (2022), Lam took bus routes suggested by her friends, collecting shaky footage of Hong Kong’s sprawling dockyards and dense buildings bordered by hills. Referencing the now defunct RoadShow multimedia system on buses, the installation presents a disorienting succession of moving landscapes, while on-screen captions obliquely contextualise these journeys. One sequence evocatively compares the dip over a steep hill to a roller-coaster ride. At other times, the three-channel format is used to express conflicting thoughts on the same location – a winding road that feels alien to one and familiar to another; the airport route that signals both departure and return. Roadshow II remarkably encapsulates the rich textures of city life while maintaining an intimate, embodied sensibility.

By contrast, Wong’s Traumreise (2022) is an urban journey in the form of a guided meditation. Shot on 8mm film, the work opens with a clip of sunlight glittering on waves as a female voice tells viewers in Cantonese to relax and imagine themselves swaying on public transport. The film cuts to footage of red taxis and buildings seen from a moving tram before jumping to imagery of the sun setting over a river and people crossing a distant bridge. “You find yourself on a different mode of public transport,” the narrator says, in a place where “the air is fresh but very cold”. The landscape changes a final time, back to a sun-drenched Victoria Harbour. “It’s time to leave,” the narrator concludes, “although you can always come back if you wish, because this place is yours.”

The exhibition has an undercurrent of nostalgia, a documentary impulse that seems to pre-empt loss. Yet there’s also an awareness of the fallibility of documentation and the impossibility of return. This is alluded to in Wong’s City at a glance (2022), postcard-sized photographs of facades and trees that appear warped under curved glass forms. In the flow of time, nothing is ever yours. A place can only belong to you in the abstracted fragments of memory, but there is beauty yet in the remembering.