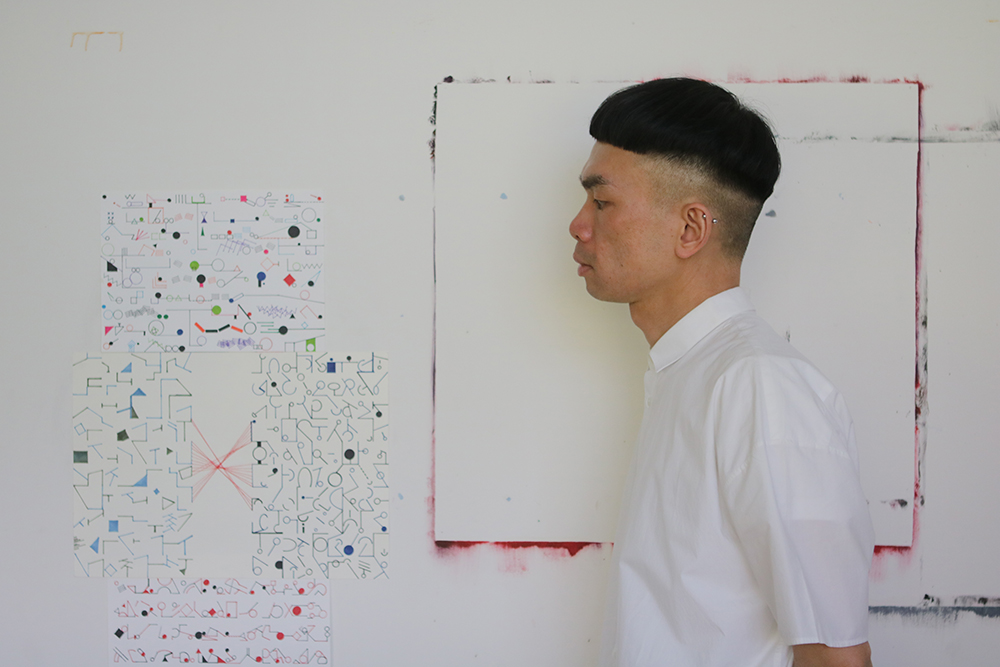 Electronic composer turned multimedia artist Leung Kei-Chuek, aka GayBird, is in possession of two racks of vintage synthesisers, each as curious and complex as the next, and each containing its own unique functionality, its own language and a poetry of its own. His favourite is the EMS Synthi AKS, a vintage machine with colourful dials that was made in the UK in 1971, before he was born.

“Because the technology is old, the electronics are not very stable,” says GayBird, describing how a sound he makes one day cannot be replicated the next. “The machine is already changed. Even if it’s on the same setting, has the same diameter and everything is the same, the sound is always changing.”

GayBird’s workspace in his studio overlooking Chai Wan harbour is one of order, without frills or fuss. Barring a dark sphere placed near the opening of the apartment, the synthesisers are what draw the visitor’s eye in their vibrant, boxy strangeness, like the remnants of an old Star Trek set.

He likes to work with the AKS because it is so mercurial. “The machine interacts with me,” he says. “That’s why I like to work with vintage synthesisers: because the machine seems to be like a musician.”

The life of a modern sound artist might sound rather lonely, especially considering the journey musical composition has taken from the days of vast orchestras to those of the laptop musician. But GayBird savours the empowerment bestowed by the boxy machines that line his studio, seeing life and personality in each of them while enjoying the sensory surprises they can offer. “When I first heard electronic music, I thought it was so unlike the music I had heard before. One person can make all the sound. I think this is amazing,” he says.

That individualism helps with his compositional process, which quite often involves building his entire aural architecture alone. “I always have the whole picture of the music [in my mind],” he says. “I sometimes don’t need other people to be involved in my concept. I make all the things that I can make based on my own ideas.”

GayBird is an established sound artist who brings together the aural with the visual in performance pieces that go beyond electronic music composition, stretching into the realm of installation, which he believes holds more possibilities than the world of music.

His enthusiasm for electronic music started after seeing local synth bands as a teenager. “I first came in touch with this sort of music when I saw a Hong Kong band called Tak Ming Pair when I was around 14. And because of this band, to help me really compose music, I got a digital keyboard and tried to learn electro music,” he says, adding that another inspiration at the time was local band eleKtro.

Much as GayBird’s heart lies in pushing boundaries in the digital sphere, his work is also rooted in musical history. “I am a very forward-looking person,” he says. “I like to create something new, always, but I also don’t forget the past.”

This idea is central to Music in Anticlockwise, a performance piece that combines electronic compositions with music by Zephyr Quartet, a string quartet based in Adelaide, South Australia. It draws on Haydn’s String Quartet in B-flat major, Op. 1, No. 1., arguably the first string quartet in history to create a soundscape that feels both lyrical and fractured, offering on one dimension a touch of pleasure, transcendence even, alongside a bewildering staccato of angst, repetition and restlessness.

To GayBird, the piece, which is complemented with lighting that accompanies the jagged, arresting rhythms, is a reflection on what it means to move forwards, to step backwards or to stay put. This idea takes shape in the “reverse time zone” he creates in his music, with a solo piece that stretches into its string quartet part, like roots of a tree with metallic limbs. The music premiered at Oz Asia Festival in Adelaide, South Australia last year. “I want to remind people not to step forward too fast,” he says, adding that there is also a political message embedded in there.

“Freedom and democracy affect the artist’s thinking,” he says. “I think artists in Hong Kong are limited by the [situation] we are in.” GayBird’s concerns for his home city also find expression in Another Music In Anticlockwise, a second piece that will be performed early next year, which explores the theme of home and its changing meaning. The Chinese character for home, “jia”, consists of a roof under which a pig lives. That simplicity is what he believes is being lost.

He turns this concept on its head with an installation designed specifically for Hong Kong. “In it, I make the pig very, very big and the house very, very small,” he says. “I think this is something like Hong Kong, where most people are living in a very small house. Also, the pig is very big but he doesn’t have a hat”; instead, there’s a mirror in place of one. “When the audience attends this installation, I want to let them to reflect on their faces.”