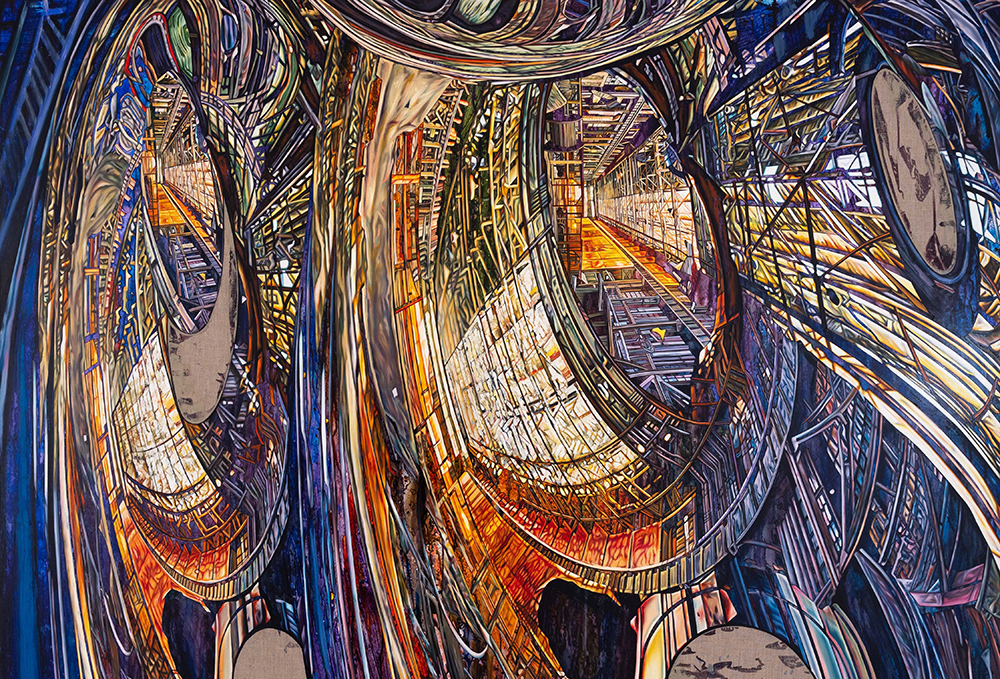 Before the Beginning and After the End /

Before the Beginning and After the End at Pearl Lam Galleries is a culmination of what Jin Meyerson describes as his “greatest hits and misses”, comparable to a rock star compiling their chart toppers alongside little-known B-sides. Spanning seven years, they contain hints at his accumulated perspective and the defining experiences of his evolution as an artist.

Meyerson was born in Incheon, South Korea, and spent his first years in an orphanage. At the age of five he was adopted by a Jewish-Swedish family and raised in Minnesota. His upbringing was just the start of his multicultural experience; as he jokes, “I was multicultural before the term was invented”. First moving to New York, then Paris, then setting up a studio in Hong Kong and moving back to South Korea, Meyerson’s narrative transcends borders and speaks to a universal viewpoint. He has a relationship with images, aesthetically psychedelic but digitally sourced, that “always comes from multiple points of entry – and it has to, otherwise I feel like a tourist”.

At the heart of the exhibition are two of the earlier paintings: The Age of Everyone (2011-12) and Broadacre (2013-14). Vastly different in many ways yet connected as the centrepieces of the show, the first piece was created in his Fo Tan studio in Hong Kong and the latter in South Korea. Referencing Frank Lloyd Wright’s utopian city of the same name, Broadacre is a large-scale oil painting that commands the room. Wright’s vision was to allow individuals to flourish in a new democratic city that eliminated the old-fashioned need for people to crowd together, while simultaneously embracing modern technology and communications. Sampled from Hong Kong’s local architecture – notorious for tight living spaces – the dense layers of buildings create the background, distorted through blocked-out patches of white, while other areas stretch across the canvas, almost like the roots and branches of a tree. Meyerson says the first time he was in Hong Kong, it “felt like it was New York but it had just been squished together”.

Situated opposite is The Age of Everyone, containing images drawn from rock concerts and street fairs with a quasi-religious aspect, for which Meyerson credits his time living in Paris. “I was going to Brussels [where] there are examples of the finest surviving Gothic stained-glass work; it had this impression on me.” Sourced from contemporary cultural events while representing the symmetry of the religious spaces, Meyerson tries to simulate the profound experiences that people had in the 16th and 17th centuries in front of stained-glass works, “but making that now, the religious aspects needed to fall away; coming from a multi-faith family, that was important”. Crowds form from above and below on the canvas, converging near the top of the painting in front of imagery representing Japan’s Fukushima Daiichi nuclear disaster of 2011. With the large gathering of people and the depiction of the disaster in the background, it has been linked with the social protests and political movements of the time. Meyerson says that because painting is more than 40,000 years old, “the way that it keeps up is by continuing to be relevant with what’s going on at the moment. The piece was made coincidentally at the time the Arab Spring was happening, and of course then it carried over to Hong Kong. It was not my intention to illustrate any of that but it was certainly within what everyone was thinking about and what I was thinking about.”

In the next room, Meyerson again references Fukushima, but in an entirely different way. A pair of paintings, The Resonance of Resurrection and Sanctuary (both 2018), source material from years after the event: the new spring flowers growing at the site.

The two paintings are mathematically identical in size and composition. Although not immediately evident at first glance, the only differences are the colours and tones used: one is light and warm and the other dark and cool. As media are circulated the quality of information can be diffused, and through the pair of paintings Meyerson comments on the maintenance and translation of these digital sources – “the fact that we are just bombarded with information on a daily basis, and maintaining a sense of meaning and quality is like an act of endurance”. This is exemplified by making a small change which produces drastically different results and feelings.

Although the exhibition spans seven years of Meyerson’s career, there was a two-year gap where he didn’t paint at all for personal reasons and because of professional exhaustion. Before closing his studio in Fo Tan, the only pieces he made were a series of works on paper, all produced in the shower of his apartment in Tsim Sha Tsui. Learning to Let Go 1 & 3 and Don’t You Forget About Me 2 & 3 (all 2015) were inspired by the printing process associated with “bored American housewives” who had invented a process similar to monoprinting that allowed them to transfer photos of their pet dogs onto wood. Using YouTube as inspiration, Meyerson used an image from his own work of Yggdrasill, the Norse tree of life, to create the final works before he left Hong Kong.

Because they had only recently been completed, Meyerson had to hand-carry Before the Beginning and After the End (2018), the work that gives the exhibition its name, and two other pieces, The Evolution of Perception 2 and Continents Between Us (both 2018), to Hong Kong in a roll. The source material stems from images of abandoned, derelict factories in Detroit; Meyerson has always been drawn to industrial and cavernous spaces.

“Since my first night I spent in America, I had these dreams about waking up in a space with no context, in an absolute blank tank where there’s nothing I can find or relate to,” he says. “As a kid it used to freak me out, but now, 40 years later, I still have that same dream from time to time and there’s something comforting about it, because I know there’s a vast world of discovery there.”

Most of Meyerson’s large-scale paintings start on the ground; masked-off areas are taped up and then paint is thrown on, allowing the backgrounds to get distorted without control. He then uses detailed paint work contrasted with expressionistic knife work. Growing up he was influenced by artists such as Gerhard Richter, but the content of his work couldn’t be more different. “What he does is extremely polarised; there is nothing in the middle,” he says. “It’s either completely photorealistic or completely abstract. Hopefully when a viewer stands back, [the techniques] come together as a full visual meal, as opposed to just having soup and steak like you have with Richter.”

The last room in the exhibition concludes Meyerson’s journey of discovery and the development of his personal language over the past two decades. Two new abstract works, Confession and Origin (both 2018), flank the centrepiece, Continents Between Us (2018). Although visually they appear worlds apart, they are linked, with the abstracts formed through the physical production of painting, with the tape used to mask off areas in Continents Between Us becoming the content for Confession and Origin. This juxtaposition of the abstract works with the large distorted oil painting sums up Meyerson’s career and evolution thus far.