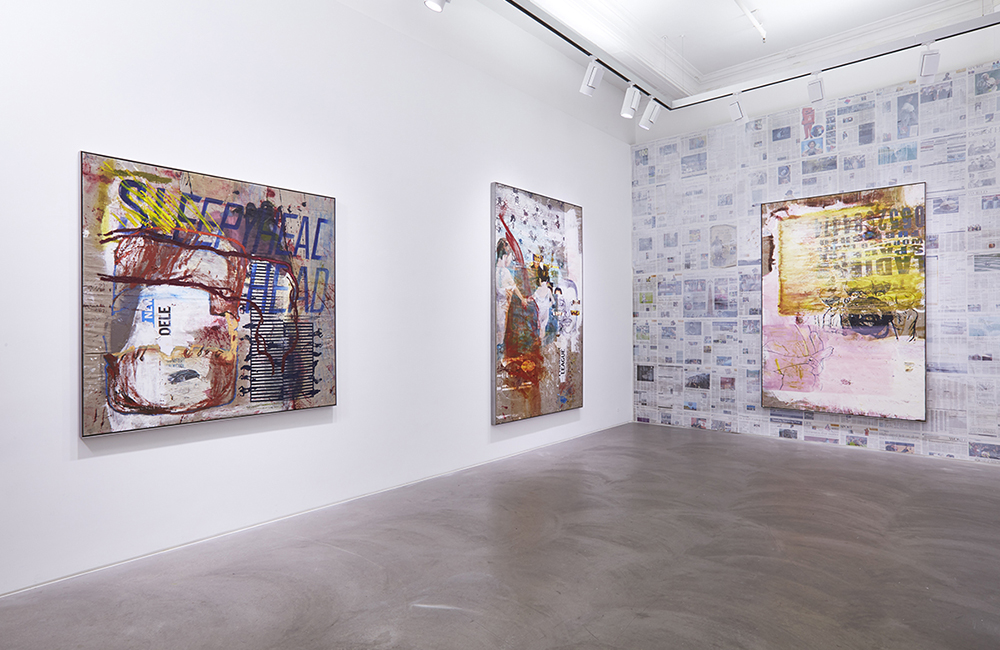 Somewhere between dizzying grids, newspaper clippings and a xeroxed copy of a page from a Chinese colouring book is Mandy El-Sayegh’s subjectivity. Or was: as the artist says, her subjectivity is a process.

“I view myself as someone who is always changing. It [one’s subjectivity] depends on different moments in time. If you accept that as you are mutable, you’ll be more accepting of change,” says El-Sayegh, who is in Hong Kong to open Dispersal,her first solo exhibition at Lehmann Maupin.

One end of the gallery is dominated by her Piece Paintings (2010-), featuring a smorgasbord of figurative imagery in unexpected juxtapositions. Theyare hoisted against an installation piece featuring copies of the South China Morning Post, meticulously arranged in a grid-like format on the walls and floor and smeared with a thin veneer of white paint. El-Sayegh says she deliberately picked a newspaper that was easily comprehensible to a western audience, and one that conveys a sense of truthfulness, to ask what context newspapers provide to help us to understand the world, whether context is always self-evident and whether picking one context means disregarding the rest.

These are questions that El-Sayegh have been conscious of all her life. Born in Selangor, Malaysia to a Chinese-Malay mother and a Pakistani father, she spent the first five years of her life in Sharjah in the UAE before moving with her family to west London. While this multiracial background inevitably informs her work, she also fears that everything she does is seen through the lens of identity politics.

“I wanted to free myself from thinking too much about context, because identity is so loaded, and making proof of yourself as an artist through identity is like an injunction,” she says. “If you think about it too consciously, you’re going to think: this might reflect this, that might reflect that. You don’t get to have the play in it.” But that doesn’t mean that her personal background doesn’t come through in her art, which is deeply personal.

That newspapers take centre stage in her exhibition, whether the Financial Times or Daily Mail at her recent show at London’s Chisenhale Gallery or the SCMP at the current show, stems from her father’s calligraphy practice. “My dad would practise calligraphy on the newspaper every day, and throw them away afterwards. I like this kind of ephemerality of newspapers. I also like how it’s not elevated. So it is about movement, practicality and being conscious of the way that people consume.”

Similarly, for her Piece Paintings, she seizes whatever is lying around her studio, be it a sweet wrapper, an old copy of a newspaper or whatever tickles her fancy at that moment, from a joke she’d noted down to an evocative Instagram picture she’d saved. Meanings are slippery and associations fragile in an area when technology and globalisation dictate that information travels at ever faster speeds than before; no sooner do our minds become tethered to an idea than it is pulled away again.

El-Sayegh herself is a product of this era. It often feels as if she is hemorrhaging thoughts, her mind darting from one idea to the next within seconds. For example: “The protests you have here [in Hong Kong], it reminds me of a piece I did on the Israel-Palestinian conflict. The idea of one country, two systems, [makes me] think of two in in, then two for one, which makes me think of hair products,” she says.

There are limits, though, usually external ones, such as the limited time she has in a gallery. At Dispersal, that’s manifested in the Net-grid (2010-) studies, where red grids are superimposed on faded images, as if nets are trying to contain the chaos bubbling underneath. This is mirrored in estimated at thirty-two (2019), a collection lumpy latex pieces that tile the floor. Rather than restrictive or comforting, she says, she finds these limitations “necessary, else I could just go on and on”.

Dressed in a crisp blue shirt, wide-legged trousers and boots, her angular face lit up with a punch of red lip, El-Sayegh looks the part of a confident, globe-trotting artist who has shown in London, New York, Guadalajara, Berlin and Sharjah in the past three years. But it took her some time to get here.

After reading fine art at the University of Westminster, she went on to get a MFA at the Royal College of Art, which she describes as “horrible”. “At that time, painting was very separate from sculpture, and that wasn’t how I understood painting. There was no criticality.” When she realised that art-making, at least the in the form then promoted by the RCA, didn’t involve a “method to apprehend the problems of life”, she hatched the idea of working as a children’s social worker.

But she didn’t really quit art, instead channelling her creative impulses through her then partner, a singer-songwriter, for whom she contributed “fragments of words”. Then they broke up. Her sense of self shattered, and at one point the emotional pain became physical, as she lost her vision. “I literally couldn’t see. It was traumatic,” she says. Her younger self would have taken relief in anatomy books. “When I felt anxious, I’d go to Hammersmith Library [in London] and look at anatomy books. I thought, if I could name all the different body parts these anxieties were coming from, I could suppress the chaos.” But the grown-up El-Sayegh went back to art. “It gave me structure. When you feel like you have nothing, you have a lot to offer. That’s why I believe trauma and creativity are connected.”

Meanwhile Denzel (2019) provides a stark commentary of how black bodies are perpetually dismembered in contemporary society. Among the concoction of imagery, US actor Denzel Washington’s eyes are cut out and pasted above a black man’s face. It was inspired a case in which a police forensic artist reconstructed a criminal’s face using the face of another African-American man and Washington’s eyes.

El-Sayegh believes that the body is the locus through which we experience and understand the world. “If you aren’t allowed to exist symbolically as a subject in society,” she says, referring to the commodification of the female body, “what do you have? You still have your body; you have your flesh.” And because context is important, she draws parallels between a female body that is rid of agency and the body of a protestor. “If you’re at a protest, your body feels that proximity; you feel the tear gas. It’s very different if you’re watching it on the news.”

It’s been six years since El-Sayegh recovered from her vision scare, but she says trauma is no longer the force driving her art, but she also fears complacency. “I’m not in that space any more; that was emotional diarrhea.. But I think you always need to feel something.”